Baxter: Why SA can beat Chipolopolo in Zambia 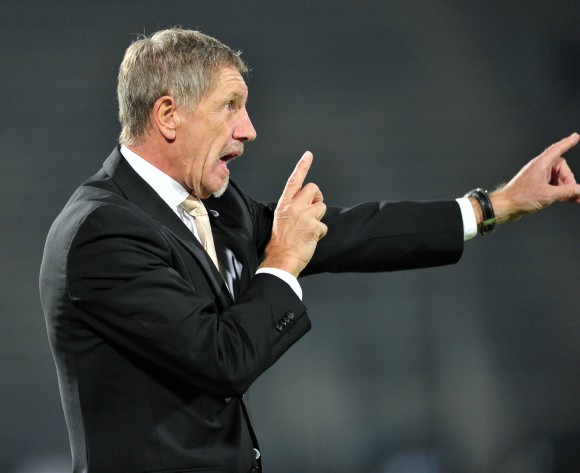 South Africa head coach Stuart Baxter believes that they can beat Zambia away following their 2-2 draw at the Buffalo City Stadium in East London on Saturday.

Gift Motupa and Mario Booysen both netted for the home side in the 2018 African Nations Championship (CHAN) qualifier first-leg clash.

“The boys played well and made the most of what they got and I think at 2-0 up I couldn’t see a way back for Zambia because they weren’t creating chances. 2-1 came out of the blue as I thought we were dangerous on the breaks as they were on attack, it really came as a damp squib," Baxter told SAFA.net.

"I thought, do I change things a bit, do I lock up? And then Tercious gets sent off so I can’t lock up, instead I have to go 4-4-1. And then comes the last throw in, and the last kick of match the ball ends up in the back of our net.

“I don’t think the boys threw it away, but they were just unlucky. The way they battled for their jersey was very admirable and this tie is certainly far from over. I don’t now how much more Zambia has got because they played that way against us the last time we met, and I think they will play that way again when we meet," the Englishman added.

Bafana Bafana will now face Chipolopolo in the second-leg game in Ndola, Zambia on Saturday, 19 August 2017. The winner on aggregate will qualify for next year's CHAN finals in Kenya.

“It’s not a great result, giving away two goals at home means they can get through on 0-0, or even 1-1. The hype before the game was that we had no chance, they are a strong side – well they certainly didn’t do that and now we are going to their place and they know that we can play them,” Baxter stressed.

“I know as a coach that it’s a difficult one for them – do they go for nil-nil or 1-1 or have a full go at us, and if they opt for the latter we can beat them on the transition then it’s 1-0 and they are shaking. So it is not easy even for them.

"What seems to them as a good result at the moment, the closer you get to the game, the more reality sinks in and they ask themselves what if they score?”
Baxter was, however, impressed with the performance of his players despite the result, although some things will have to fixed," he explained.

“I just think our general play should have been better and we should have put one of our chances away but I think the boys did as well as anybody could expect. Gift was outstanding, he ran their backline ragged, a couple of the young ones too – Meyiwa came in when Khumalo got injured and he did a great job.

"The captain Mario (Booysen) and Sandile (Mthethwa) were solid. They all should get a pat on the back for that. Now they will have to lick their wounds, sharpen their swords, fasten their seatbelts and go to Zambia and get a result – and that is not impossible. I am confident Zambia will have a tough game and they know it."

According to the SAFA website the Bafana squad is set to lose players who are returning to their clubs – and won’t be part of the second leg fixture – Menzi Masuku (Chippa United), Shane Thompson (Mthatha Bucks), Tshepo Mabua, Keegan Pool (both Stellenbosch FC) and Gift Motupa (Baroka FC).

Tercious Malepe is not eligible to play as he was red-carded against Zambia in the first leg while Asavela Mbekile has a family bereavement.

“Maybe Kumalo can’t play too because of his injury, which we are monitoring, so it’s going to be mission impossible again – but then again it was mission impossible today and they nearly pulled it off. Let’s rather talk about the players that will stay because they will have to do the job for us,” Baxter concluded.