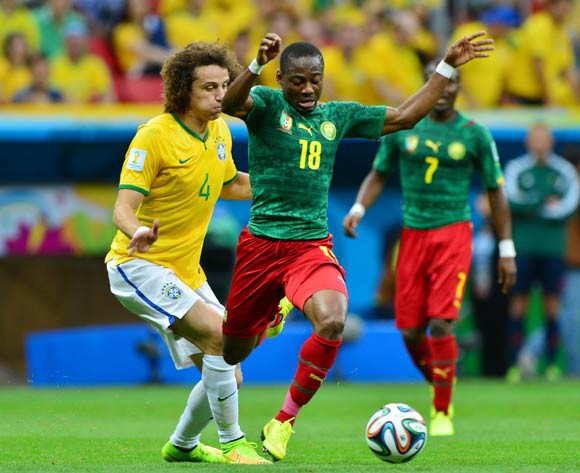 David Luiz of Brazil fouls Eyong Enoh of Cameroon during the 2014 Brazil World Cup Final Group A football match between Cameroon and Brazil at the Estadio Nacional Brasilia, Brazil on 23 June 2014

Soon after leaving Belgian giants Standard Liege, Cameroonian international Eyong Enoh is hoping to secure a move to a club in the United Kingdom (UK).

The 31-year-old central defensive midfielder, who is currently a free agent, has been linked with English Championship outfit Bolton Wanderers.

Enoh has revealed that he could have moved to Russia. But he decided to hold out for a possible move back to the UK having played for English side Fulham in 2013.

"I am just focused on training," Enoh told SkySport.

"It is quite tough on your own but that is why I have got myself a personal trainer to push me. It is a big challenge because it is the first time I have been out of contract.

"I could have renewed. I could have got something in Russia or elsewhere. But I just wanted to come back to the UK and I want to make a good decision," he added.

"I feel good in myself. Whether the best years are ahead is up to me, but the potential is there. The key is to get the right club with the right ambition."

The 51-time capped international, who is a well-travelled player, made 18 appearances for Liege in the Belgian First Division A last season.

He has plied his trade in Northern Cyprus, South Africa, Netherlands, England, Turkey as well as Belgium.