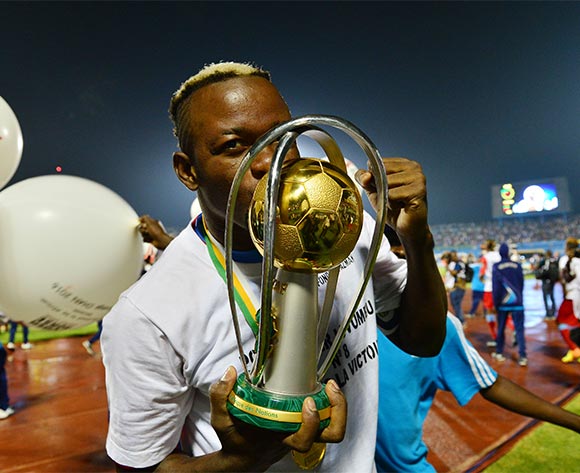 Joel Kimwaki of DR Congo celebrates victory kisses trophy during the 2016 CHAN Rwanda Final between DR Congo and Mali at the Amahoro Stadium in Kigali, Rwanda on 07 February 2016 ©Gavin Barker/BackpagePix

AfricanFootball looks ahead to the weekend’s 2018 African Nations Championship qualifying action, which will see no less than 13 teams secure a spot in the finals.

Hosts Kenya and early qualifiers Equatorial Guinea - who had a walkover against Gabon in the final tie - are already assured of their places in next year’s CHAN tournament, while the final team to book a spot will be either Guinea or Senegal, who meet in the second leg of their postponed tie in Conakry next weekend. The Teranga Lions lead 3-1 from the first match.

Looking to this weekend’s action, the Northern Zone takes centre stage with the opening matches on Friday night, as Morocco look to make the most of home advantage against Egypt after the teams’ 1-1 draw last Sunday, while Libya aim to build on a 2-1 lead when they host Algeria in Sfax.

Saturday’s biggest matches come from Zone West B and the Southern Zone. West African heavyweights Nigeria and Ivory Coast will both be at home and looking to overturn one-goal deficits in their ties against Benin and Niger respectively, while Zambia are favoured to oust South Africa in Ndola after the teams drew 2-2 in the first leg last weekend.

Sunday features just two matches, but they should both be humdingers. In Kumasi, Ghana will host Burkina Faso for what should be another cracking encounter following their 2-2 draw in Ouagadougou, while Namibia will need to up their game in Windhoek as they look to overturn a 1-2 deficit against plucky islanders the Comoros.

The aggregate winners will qualify for the 2018 CHAN finals which will be held in Kenya from 11 January to 2 February.