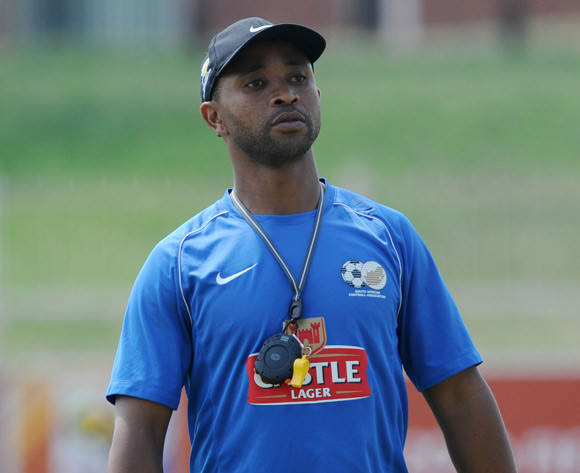 Bafana Bafana failed to qualify for the finals after losing 2-0 to Zambia's Chipolopolo in the second-leg clash in Ndola, Zambia on Saturday.

Zambia advanced to the finals which will be hosted by Kenya after winning the tie 4-2 on aggregate - with the first-leg having ended in a 2-2 draw in East London, South Africa.

Senong, who was in charge of the team in the absence of SA head coach Stuart Baxter, spoke to the South African Football Association (SAFA) Media.

SAFA MEDIA: Your impressions of the match against Zambia?

Thabo Senong: It was a good match and very tough. We played well for about 70 minutes, then the energy levels of our boys started to drop, that’s when we were forced to make a few substitutions. We created chances throughout the match but we did not convert them. We are disappointed that we did not win the match and qualify for 2018 CHAN, but we are not discouraged because we still believe it was a good exercise for some players to get international experience. It was a good exercise for some young players to be in structure and also increase the big pool of Bafana Bafana. There were players that impressed and this will be a good experience for them going back to their clubs and it will contribute positively to their football.

SAFA MEDIA: It must be an exciting journey, however difficult it was, that has been travelled since the COSAFA Cup matches up to this last one in CHAN?

TS: Yes it has been. If you think about it we have worked with different groups of players throughout the CHAN qualifiers and the COSAFA Cup camps, despite the players coming in and going out of the squad, that gave us a good opportunity to give other players a chance to play at international level. So yes, it was good discoveries, and going back to their clubs these players will benefit a lot. But as the technical team, we are very proud that we have managed to unleash a lot of potential future players that that will be taken seriously by their clubs and some will be considered seriously for the main Bafana Bafana squad going forward.

SAFA MEDIA: In your view what will you count as an achievement from this whole exercise?

TS: Throughout the four matches – two against Botswana and a further two against Zambia – we have managed to give 35 players a chance to play at this level and to learn under these conditions. We have given about 15 former U20 players an opportunity to grow and learn from this kind of environment, and this will benefit the future Olympic Team, which will have players who would have played in Bafana Bafana already. The exercise will help some of these senior players because most of them are fringe players at their clubs – Sibusiso Khumalo, Kgotso Moleko, Mario Booysen – they will go back to their respective clubs with a lot of confidence, and that might help them to be considered by the respective coaches of the clubs.

SAFA MEDIA: Despite all the challenges, was this a worthwhile exercise?

TS: Despite all the challenges that we encountered, mainly of players being withdrawn from the national team after being recalled by their clubs, this was indeed a worthy exercise. I would like to say a big thank you to all the clubs that managed to release their players, and we know it was not easy, as they also had to move their programmes around to accommodate us. On the overall, this has been a good and fruitful exercise where all the stakeholders have learnt a lot. From now on we know that Bafana Bafana has a big pool of players that the head coach can always look at whenever he wants to build his team to qualify for the 2018 World Cup as well as the 2019 AFCON tournament.

SAFA MEDIA: You spoke about the U20 players being used, but what next for them?

TS: If you remember very well, this is the same exercise we used in 2015 where we used the CHAN and COSAFA Cup to prepare the 2016 Olympic Team, and it benefitted us a lot because we managed to qualify for the Olympics Games in Brazil last year. So we have used the same exercise where we have again given many U20 players Bafana Bafana caps, so with these players we are going to start the road to Olympic qualifiers next year. These players will have benefitted a lot from these CHAN and COSAFA Cup matches, with the experience they will be able to compete and qualify for the Olympic Games in 2020 in Tokyo.

SAFA MEDIA: So not only are we giving ourselves a chance in the qualifiers coming up, but also increasing the pool of Bafana Bafana.

TS: Absolutely. This was the policy that was encouraged by head coach Stuart Baxter that whenever we play these two tournaments we need to have a clear vision and policy – we must always make sure that there is 60 percent young players coming from the junior structures and 40 percent experienced fringe players from the PSL that can may be be considered for the main Bafana Bafana squad going forward and also considered by their clubs in terms of getting game time.

SAFA MEDIA: This will surely mean the youngster will not be lost in the system?

TS: All these youngsters that have been part of the COSAFA/CHAN exercise will never be lost in the system because next year in February/March they will start their route to qualifying for U23 AFCON, and will follow that with qualifications for the Olympic Games.

SAFA MEDIA: The Bafana Bafana technical team spoke of COSAFA/CHAN in terms of development, do you think that was achieved?

TS: Yes, from Day 1 we agreed that we had to focus on development, put our focus on young players and we took a big risk, which paid off. This exercise has helped a lot because we believe the likes of Sandile Mthethwa will get more game time, and the same goes for Sipho Mbule, Tercious Malepe, Jamie Webber and Masilake Phohlongo. I believe this whole exercise was about rebuilding the future Olympic team and we have achieved that.