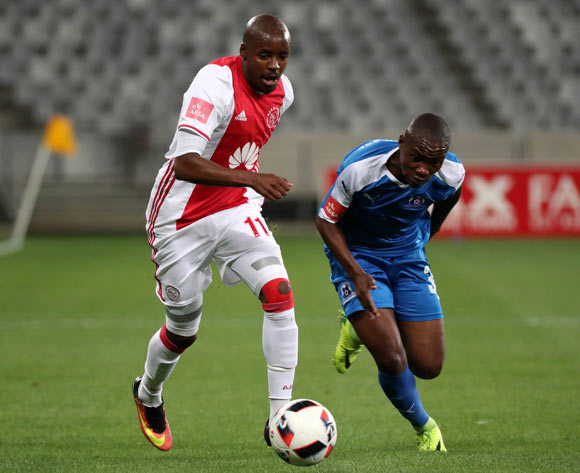 Maritzburg United will aim to continue their strong form when they host Ajax Cape Town for an Absa Premiership match at Harry Gwala Stadium on 23 August 2017, kick-off at 19h30.

Maritzburg opened their league campaign with an impressive 2-0 away win over Platinum Stars on Sunday. Late goals from Deolin Mekoa and Lebohang Maboe took the KwaZulu-Natal side to three hard-earned points.

Coach Fadlu Davids has overseen two successive victories at the start of the season (including an impressive triumph over Mamelodi Sundowns in the MTN8) and will see the chance of a hat-trick as a sign of his team’s growing confidence.

Ajax began their 2017/18 league season with a 1-1 draw at home to Golden Arrows on Saturday night. The Cape side had to fight back from a goal down to earn a share of the spoils, with Rivaldo Coetzee scoring their equaliser.

The Urban Warriors struggled away from home last season, winning just three of their 15 games on the road. Coach Stanley Menzo will target a stronger showing on the road this term, starting with this clash in Pietermaritzburg.

In head-to-head stats, Maritzburg and Ajax have met in 22 league matches since 2005/06. The Team of Choice has claimed nine wins compared to seven for the Urban Warriors, while six matches have been drawn. United have a strong home record against the Cape team, with eight wins and just two defeats from 11 turns as hosts.

The Team of Choice claimed a league ‘double’ over Ajax last season, winning 2-1 in the ‘Mother City’ in the first half of the campaign, followed by a victory of the same score at home in Pietermaritzburg. It was the KwaZulu-Natal club’s third successive league win over the Urban Warriors, and a fourth from the teams’ last five meetings.