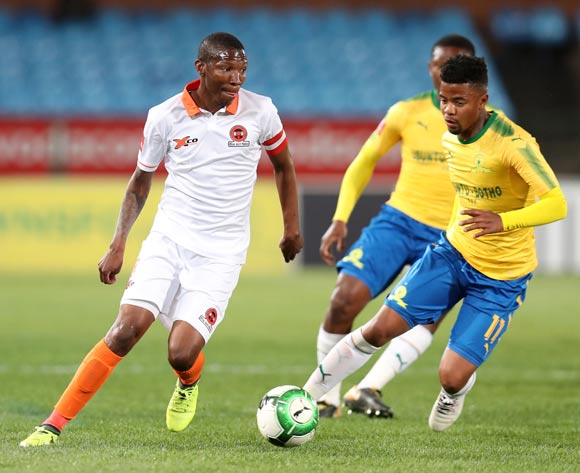 A brace of goals from Rodney Ramagalela against his former team saw Polokwane City defeat Mamelodi Sundowns 2-1 on Tuesday night.

The Absa Premiership match at Loftus Versfeld also featured a first Brazilians goal for George Lebese, while Rise and Shine have gone joint top of the table with Orlando Pirates.

Polokwane had the first clear chance of the match, with a simple passing move opening up space for Rodney Ramagalela to shoot on goal in the seventh minute, but he dragged his effort wide of the target.

Sundowns handed a debut to new signing Thokozani Sekotlong and the former Free State Stars striker should have had a hat-trick inside the first 30 minutes. He missed three tremendous opportunities, all set up by the pace and dribbling skill of Percy Tau.

Just past the half hour mark the visitors threatened again through the pace of Ramagalela, but his danger was quickly quelled by a superb challenge from Motjeka Madisha.

However, it was soon third time lucky for Ramagalela, who took advantage of a rebound to score from close range in the 35th minute and hand Polokwane the lead against his old side.

Sundowns look to hit back before half time, but the promising Tau and Sekotlong partnership remained frustrated up to the interval, leaving Rise and Shine 1-0 up at the midway mark.

Early in the second half the Brazilians needs goalkeeper Denis Onyango to make a superb save and prevent Thabang Klaas from adding a second goal to Polokwane’s tally.

‘Downs recovered from that scare to draw level within 10 minutes of the restart, as they earned a penalty for hand-ball in the box. George Lebese took on the spot kick and netted his first goal for the Tshwane giants to make it 1-1.

Yet parity lasted only until the 69th minute, when Ramagalela scored a brilliant opportunist goal to put City back in the lead. The striker received a ball from midfield, turned into space and struck home a long-range volley which caught Onyango out of position.

The closest ‘Downs came to an equaliser was a free kick from skipper Hlompho Kekana which narrowly missed George Chigova’s left-hand upright in the 82nd minute.