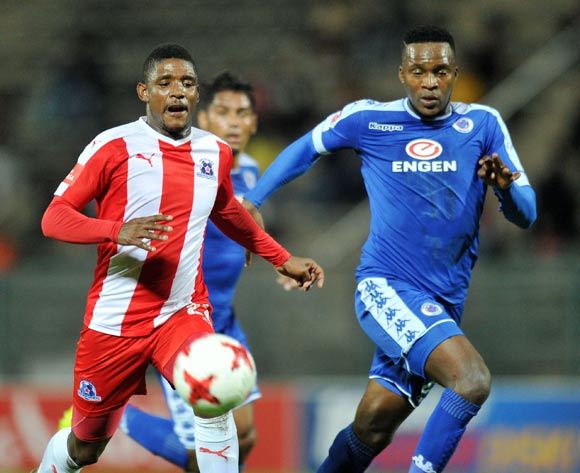 Maritzburg United will be looking to book a spot in the MTN8 Cup semi-final as they visit another Tshwane giant. Having beaten Mamelodi Sundowns in the opening round, they will hope to win away.

On the other hand, coach Eric Tinkler wants a win as he will want to bag his first trophy in charge of the three-time Absa Premiership champions.

90+3': A brilliant counter attack by Maritzburg sees the visitors missing a great opportunity to make it 2-1. But the effort sails wide off the target.

84' GOAL- Maritzburg a wonderful pass to Lebohang Maboe in the box allowed the right footed player to blast a rocket to beat Williams.

80': 10 minutes remaining in the encounter. The Nedbank Cup champions are still leading 1-0.

72': Williams produces a wonderful save to deny Mekoa from a long range effort. A well struck shot by the left winger. Modiba off for Alexander.

67': The Tshwane giants are searching for their second goal. Maritzburg steady at the back. Williams called to deny United.

59' - Dove Wome scores, but he is judged to be from an offside position. SuperSport United 1-0 Maritzburg United.

53': Thuso Phala receives a defence splitting pass, he makes no mistake to beat Mpandle on the far post. 1-0 to SuperSport United.

49': - Free kick for Maritzburg, but they don't benefit on the set piece.

46' Second half gets underway.

45': Thuso Phala causing all sorts of troubles for Maritzburg United, yet there are no goals in the opening half.

44': The two sides are yet to open up the defence and it looks like we will head to the interval with no goals. Maritzburg United 0-0 SuperSport United

40': United looking to bag their first goal and Williams called to produce a fine save to parry the ball over the cross bar. We are in the final five minutes of the opening half.

33': Saal wasteful in the heart of the park.The fourth ball going astray by Maritzburg.Tinkler;'s side under pressure. Mpandle. makes a good save to deny Grobler.

29': Beautiful football by Maritzburg and Makaringe unleashes a powerful shot, but sails wide over the cross bar. No goals between the two giants.

24': Mpandle nearly misjudges the flight of the ball..He comes out but it flies over the cross bar. he is now injured receiving treatment.

18': Makaringe takes a shot, but it goes wide. No goals in the opening 20 minutes i the opening half of the encounter.

08': Fortune Makaringe injured in Maritzburg's half. No clear cut chances so far in the encounter.

06': Both sides still searching for ball possession. Maritzburg keeper, doing all the work at the back.