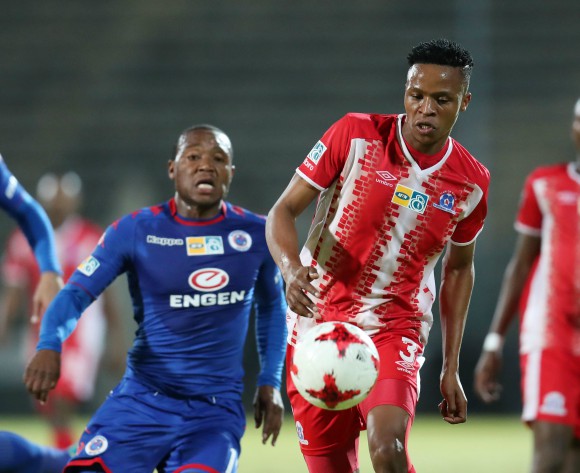 SuperSport United failed to use their home advantage when they drew 1-1 against Maritzburg United in their MTN8 first leg, semifinal clash at Lucas Moripe Stadium on Saturday night.

Two second half strikes from Thuso Phala and Lebohang Maboe ensured the teams will be level ahead of the second leg.

Despite a tough encounter in the opening 20 minutes of the match, both coaches looked to employ a defensive approach.

However, the 33rd minute saw Devon Saal wasting good moves by the visitors in the heart of the park as they continued to keep Eric Tinkler's side under pressure.

On the return from the interval, it was the KwaZulu-Natal side pushing for an opener, but their decision making in the final third was not convincing.

In the 53rd minute, Phala opened the scoring after receiving a defence-splitting pass and blasted a powerful shot through Mpandle to hand Tinkler's side a 1-0 lead.

With less than 18 minutes remaining, Williams produced a wonderful save to deny Deolin Mekoa from a long range effort. A well struck shot by the left winger.

The final 10 minutes of the encounter had no clear cut opportunities, but it was the Team of Choice which had an upper hand.

Davids' men continued to pile pressure on their hosts and a wonderful pass reached Maboe in the box, whose effort was too powerful for goalkeeper Williams.

However, with added minutes in the injury time, both sides failed to create chances to secure a winning goal as they shared the spoils.

The teams will meet for the second leg on the ninth of September, as the two Premier Soccer League giants look to secure a spot in the final.