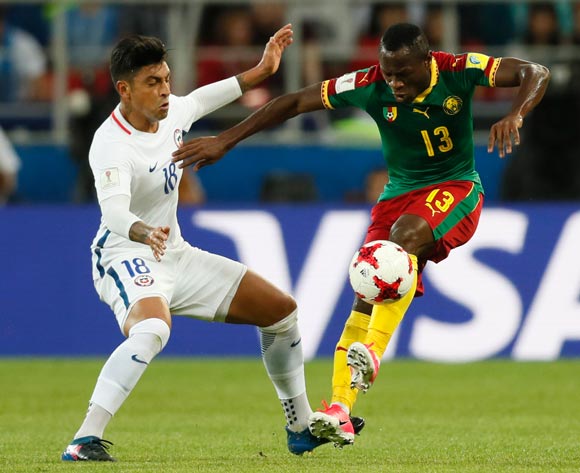 epa06035910 Christian Bassogog (R) of Cameroon and Gonzalo Jara of Chile in action during the FIFA Confederations Cup 2017 group B soccer match between Cameroon and Chile at the Spartak Stadium in Moscow, Russia, 18 June 2017. EPA/YURI KOCHETKOV

The Indomitable Lions will face off with the Super Eagles in back to back highly anticipated 2018 FIFA World Cup qualifiers.

Nigeria will welcome Cameroon in Uyo on the 1st of September 2017, while the return leg match is scheduled to be played in Yaounde three days later.

"They have very good players and many of them are playing in Europe. But we must defeat them if we are to maintain our qualifying hopes. We should take the game to them.

Cameroon are placed second on Group B standings with two points. Nigeria are sitting at the top of the group with six points with four matches left.

"We need to fight to defeat them. Our players are young, but we are strong as a team," the Hernan Jianye midfielder continued.

“He (Hugo Broos - Cameroon coach) is a good coach. He knows what the players are good at so he can get the best out of us. In this team, everyone has his chance."