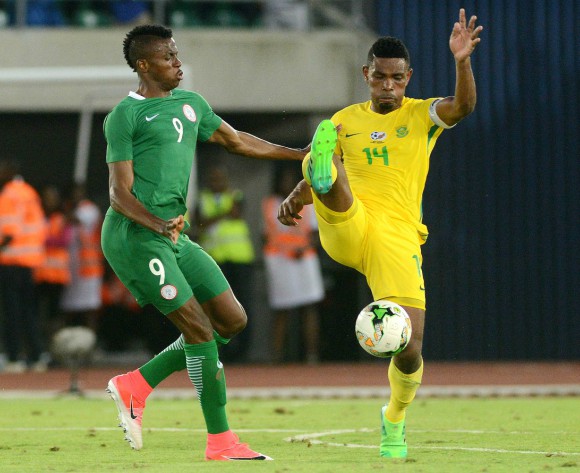 Victor Osimhen of Nigeria against Thulani Hlatshwayo of South Africa

Cape Verde will square off with South Africa in the 2018 FIFA World Cup qualifier at the Estadio Nacional de Cabo Verde in Praia on Friday.

The Blue Sharks lost 1-0 at home in their last competitive match which was against Uganda in the 2019 Africa Cup of Nations (AFCON) qualifier two months ago.

Lucio Antunes, who led Cape Verde to the 2013 AFCON finals for the first time in history, was reappointed Blue Sharks head coach in September, 2016.

Cape Verde are placed fourth on the Group D standings without a single point from two matches. They are three points behind third-placed Senegal.

Ryan Mendes, who plays for Kayserispor in Turkey, is one of Cape Verde's key players and the striker will look to inspire his side to its first Group D win.

Meanwhile, South Africa will return to action against Cape Verde after defeating Nigeria 2-0 in the 2019 AFCON qualifier in Uyo two months ago.

This was new Bafana Bafana head coach Stuart Baxter's first competitive match in charge of the team - having been reappointed in May, 2017.

South Africa are placed second on the Group D table with four points with four games left. They are only behind group leaders Burkina Faso on goal-difference.

Tokelo Rantie, who is plying his trade in Turkey for Genclerbirligi, is South Africa's dangerman and he will be keen to help his side beat the Blue Sharks.

Referee Mehdi Abid Charef, who hails from Algeria, will officiate the encounter between Cape Verde and South Africa in Praia.

The return leg match will be played at the Moses Mabhida Stadium in Durban, South Africa next week Tue