Group D in the balance following 0-0 draw in Dakar 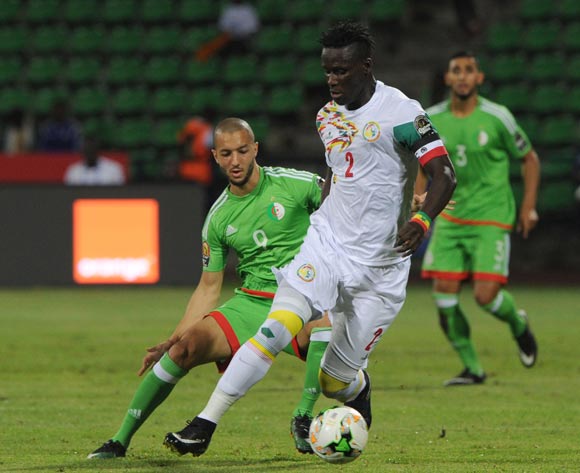 Serigne Mbodji of Senegal is challenged by Sofiane Hanni of Algeria during the Afcon Group B match between Senegal and Algeria on the 23 January 2017 at Franceville , Gabon Pic Sydney Mahlangu/ BackpagePix

Senegal were held to a 0-0 draw by Burkina Faso in a 2018 FIFA World Cup qualifier at the Stade Léopold Sédar Senghor in Dakar on Saturday evening, as things in Group D remain wide open.

The Lions of Teranga had a real opportunity to stamp their authority following South Africa's 2-1 defeat in Praia, but failed in their attempt as focus now switches to the reverse fixture in Ouagadougou this coming Tuesday.

The hosts had Kalidou Koulibaly sent off with six minutes remaining in what ultimately proved to be an underwhelming outing for the West Africans as the Burkinabe remain in control atop the standings.

Both teams showcased their intent from the onset with Idrissa Gana Gueye and
Alain Traoré trying their luck at either end of the pitch before the half-hour mark.

Prejuce Nakoulma then forced Khadim N'Diaye into a good save in the 37th minute with the visitors not content in going on the defensive in the Senegalese capital.

Despite chances at either end the half would end goalless.

The clash would continue at the same tempo following the interval with Senegal throwing everything but the kitchen sink at their opponents.

Burkina Faso, though, stood firm and had their opportunities as Koulibaly received his marching orders in the 84th minute following a second bookable offence.

The visitors introduced Aristide Bancé in an attempt to make good on their advantage, but the burly forward simply ran out of time as the two teams ultimately shared the spoils.