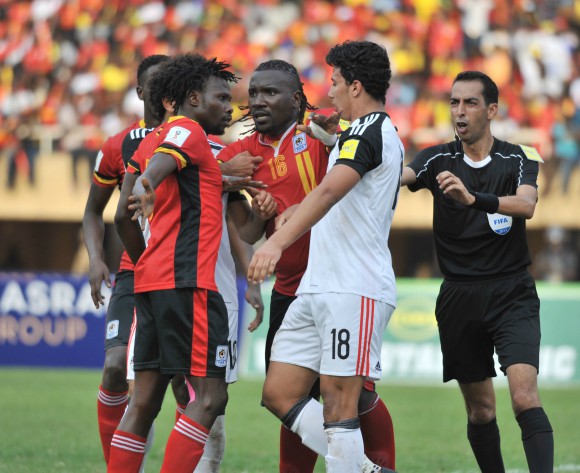 Uganda and Egypt players engulfed in a scuffle

The hosts, Egypt are under pressure to bounce back from their 1-0 loss they suffered in Kampala last week to reclaim their top spot.

On the other hand, Uganda will be targeting a second win over the Pharaohs in Alexandria as they want to consolidate their top spot in the group.

92' - It is over in the Group B match in Alexandria. Egypt return to the top of the table with nine points.

89' - Sub for Uganda: Karissa for Nsibambi

88' - Brilliant save by Onyango to deny Salah as the winger looked for a bottom corner. The Pharaohs piling pressure looking for a second goal.

83' - Uganda really pushing to find an equaliser. A header from Nsibambi was not too strong as El-Hadary makes a save on the right corner.

79' - Luwagga receives a wonderful pass on the far post, but his effort lacks power and goes wide. Egypt 1-0 Uganda

73' - Onyango alert to read a dangerous ball, a cross is miskicked by Juuko. No clear cut chances in the final 20 minutes pf the contest.

64' - Uganda pushing for an equaliser, they get a corner, referee gives a set piece to the hosts. Frustration for the Cranes.

50' - Egypt calls for a penalty, but referee Victor Gomes not interested. A fats-paced start for the Egyptians.

Uganda sub: 46' Muwanga on for Ochaya

46' - The second half gets underway in Alexandria with the hosts still leading 1-0.

45' - We are in the injury time of the opening half in Alexandria. Egypt leading through Salah's sixth minute goal.

40' - Good touches by the Cranes but their decision making in the d-line or final third needs to be decisive. They are not threatening the opponent

32' - Uganda delivers a dangerous set piece into the penalty area, but El-Hadary collects it. Egypt 1-0 Uganda

27' - Uganda failing to make good decisions in the final third of the hosts. Good football so far from both sides. Onyango denies the El-Said from a powerful header in the box.

22' - Two players are injured in the heart of the park. Onyango restarts the game.

19' - Uganda now starting to come out of the blocks, a good cross down the right but Nsibambi's header flies over the cross bar.

15' - A well delivered cross by Salah in search of Amr Gamaal in the box saw the forward missing the ball from close range on the far post. Uganda 0-1 Egypt

10' - The Pharaohs having an advantage in the first 10 minutes. They enjoy the ball possession so far. Uganda on the backfoot.

06'- Both sides chasing an early goal, but the hosts are the ones spending more time in the Cranes half. Mohamed Salah nets from a rebound after Onyango initially denied him from close range. Egypt 1-0 Uganda