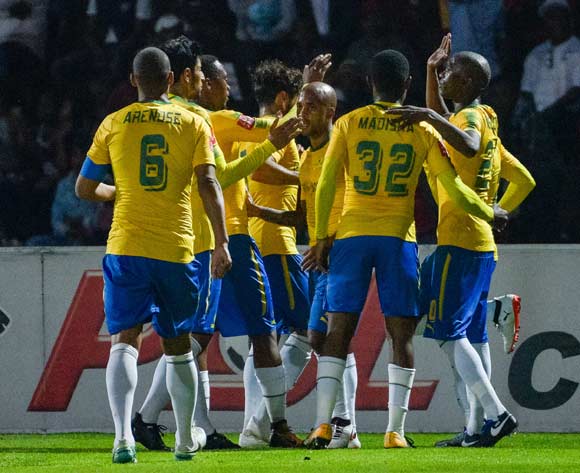 The victory at Goble Park Stadium takes the Brazilians up to third place on the log (level on points with Maritzburg United and Cape Town City), while Ea Lla Koto drop to second-last after a defeat in new coach Luc Eymael’s first game in charge.

Stars started brightly and created the first chance of the match in the 10th minute, with Katlego Mokhuoane cutting inside from the left before sending a low shot just wide of the near post.

Sundowns also had their moments in attack in the first half, with Leonardo Castro denied from a tight angle in the 22nd minute by a combination of goalkeeper Badra Ali Sangare and the upright.

The Brazilians also had a setback in their forward line when Liberian Anthony Laffor picked up an ankle injury. He tried to run it off, but was replaced on 29 minutes by Percy Tau.

Yet Tau’s introduction proved very fruitful for ‘Downs, with the young striker opening the scoring in the 44th minute with a fine strike direct from a free kick. The visitors led 1-0 at the interval.

And they should have doubled their advantage just five minutes into the second half. George Lebese whipped in a fine cross from a free kick to find Castro free in the box, but the Colombian put his glancing header wide.

Yet the second goal arrived on the hour mark and once again it was Tau who set the match alight. The substitute cut inside from the right flank, skipped past a couple of challenges and fired home a superb shot from just outside the ‘D’ of the penalty area.

Ea Lla Koto didn’t really threaten to get back in the game, though they sparked a few late fears in the Brazilians when Nhlanhla Vilakazi scored with a towering header deep in injury time. However, it was too little, too late for the home side.