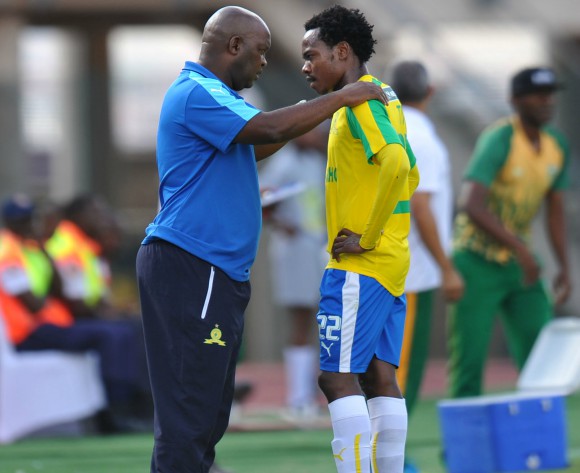 Pitso Mosimane says he is happy to see Percy Tau opting to shoot rather than dribble, having returned to scoring form for Mamelodi Sundowns.

The 23-year-old scored both of Sundowns’ goals as they defeated Free State Stars 2-1 in an Absa Premiership clash on Monday night.

With the Brazilians gearing up for a CAF Champions League quarterfinal, first leg clash with Wydad Casablanca this coming weekend, Tau’s form has put a smile on Mosimane’s face.

"I thought the game was long finished but it's okay. I'm disappointed with the late goal because it's the last five seconds of the game and we're not picking the player up. He was free. It spoils the whole thing. We wanted to keep the clean sheet but I'm happy for Percy Tau, once he shoots he scores," Mosimane told SuperSport cameras after the match.

"I told him, 'stop dribbling, how many dribblings do you want? You've got to shoot', and he shot. And the free-kick, he's practicing it, hey. I'm so happy he's practicing them all the time. Practice makes perfect. We were stable, we controlled the game. We're happy, three points, it's important."

However, Sundowns have a lengthy list of injuries ahead of the first leg against Wydad.

"Anthony [Laffor] is on crutches, Khama [Billiat] is injured, Leo [Castro] made it through a late fitness test, [Tiyani] Mabunda is injured,” added ‘Jingles’.

“We need to make sure that we look after the team. A team that played tonight is a team I trusted. If you're in the team of Mamelodi Sundowns, you have to play, there's no first team and second team."