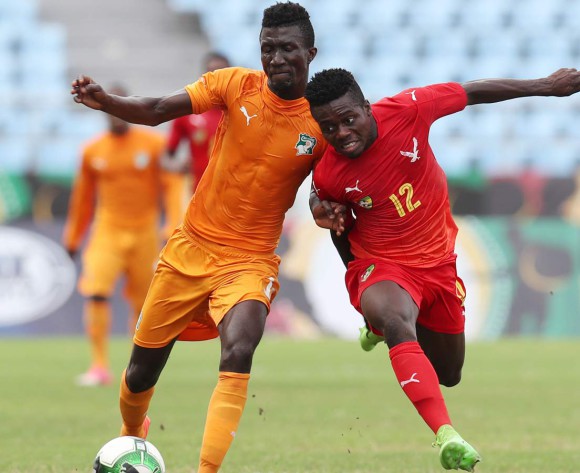 Cote d’Ivoire goalkeeper Jean Malick Ble Zadi proved to be a hero for the Elephants after saving two penalties and scoring one himself as they beat Togo 4-3 in a penalty shootout, after their Last 16 match at the 2017 WAFU Cup of Nations ended 0-0 at the Cape Coast Sports Stadium on Tuesday, September 12.

The Sparrow Hawks started the better of the two teams and created the first significant chance on goal in the sixth minute when Essis Beaudeleire Aka played Roland Zan Bi through on goal, but he saw his close range effort well-saved by the Ivorian keeper.

Ten minutes later Togo’s Messan Degli created some space for himself 25-yards out from goal, but he saw his thunderbolt brilliantly saved by Jean Malick Ble Zadi.

In the 22nd minute Messan Degli turned provider when his cross from the right was met by Koidjo Sewonou, but his ten-yard header came off the crossbar.

In the 38th minute Togo were on the attack again when Koidjo Sewonou drove into the box from the right, beating two defenders in the process, but with just the keeper to beat he shot narrowly wide from eight-yards out

Both teams traded blows in the final minutes of the stanza, but neither could break the deadlock before the halftime whistle.

The first shot on goal in the second half came in the 56th minute when Togo’s Komlan Agbegniadan fired a thunderous 20-yard volley just over the target.

The next decent attempt on goal only came in the 76th minute when Cote d’Ivoire’s Inza Diabate cut inside from the left flank and saw his shot from the edge of the box deflected inches wide.

Thomas Gonazo almost won the match for the Elephants in the final minute of the match when he met a cross from the right, but his 14-yard effort was spectacularly saved by the Ivorian keeper.

The match ended 0-0 and went into the dreaded penalty shootout which Cote d’Ivoire won 4-3 after two saves from goalkeeper Jean Malick Ble Zadi.