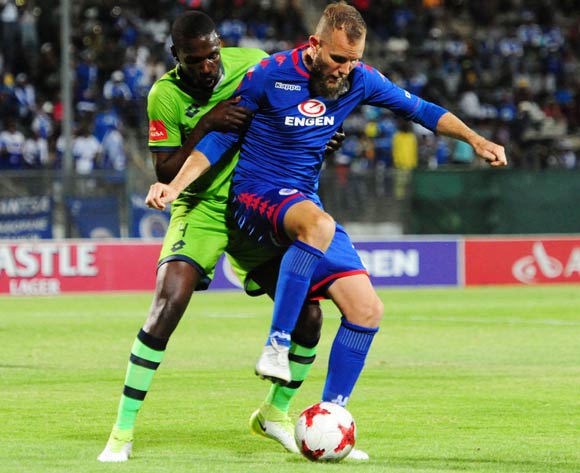 SuperSport United’s Sifiso Myeni scored a superb goal to ensure his former mentor Roger de Sa suffered a 2-0 defeat in his first game in charge of Platinum Stars on Tuesday.

The Absa Premiership match at Lucas Moripe Stadium also saw Jeremy Brockie net for Matsatsantsa as they handed Dikwena a third successive loss at the start of the 2017/18 season.

The match took its time to come to life, but just before the half hour mark there were finally notable scoring chances at either end, with Clayton Daniels heading just wide for United before Robert Ng’ambi sent an ambitious volley off target just a few moments later.

On 39 minutes SuperSport striker Jeremy Brockie was granted the best chance of the half by a fine cross from Thuso Phala, but he sent his header just wide of the mark, much to Mbongeni Mzimela’s relief.

The first half finished goalless, but Matsatsantsa will have felt that they had the better chances and should have gone into the dressing room with some kind of advantage to show for their efforts.

Dikwena made the first clear chances of the second half, with Ng’ambi heading over the 48th minute before Bongi Ntuli struck a shot mere inches wide of Ronwen Williams’ posts in the 53rd.

SuperSport’s first chance of the second stanza arrived a few minutes after the hour mark, with substitute Sipho Mbule shooting from long range with virtually his first touch of the ball, but the effort sailed over.

The match looked destined to end in a stalemate, but in the 85th minute another United substitute turned it in his side’s favour: Sifiso Myeni picked up a ball on the edge of the box and proceeded to send a superb volley beyond the reach of Mzimela to put the hosts 1-0 up.

SuperSport still had time to add another goal late on, with Jeremy Brockie continuing his fine form by coolly converting a chance in the fourth minute of added time to add a little extra gloss to the score line.