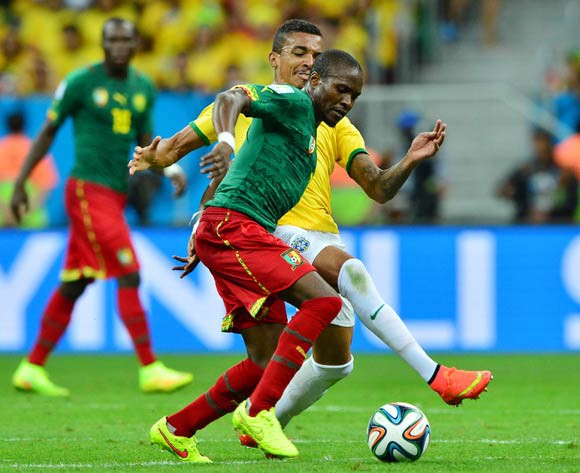 Landry Nguemo of Cameroon shields ball from Luiz Gustavo of Brazil during the 2014 Brazil World Cup Final Group A football match between Cameroon and Brazil at the Estadio Nacional Brasilia, Brazil on 23 June 2014

The 31-year-old central midfielder doesn't know why he has been deemed surplus to requirements at the club.

"I restarted training with Kayserispor as normal, but overnight the club chiefs let me know that I needed to find another club and they put me apart from the first team. I still have two years left on my contract," he told Foot Mercato.

"Today, I'm still training to keep my physical fitness with a group separate from the first team, which also includes (Comorian goalkeeper) Ali Ahamada. This situation has been going on for two months.

"I've spoken with the current coach, but it's not up to him to make the decision about my return to the first team. Our conversation went well, but the chiefs have made it known that I need to find a new escape route, without giving me the chance to play," he continued.

"You know, things are strange in Turkey.I have to find...a way to end my contract. They have to respect it because I still have two years left.

"We have a few months in which we can find a solution, but either I need to return to the squad or I go elsewhere. For the time being, nothing is on the horizon as the transfer window is closed, we're waiting until January to discuss with the [club] management," he added.

"From my point of view, I have to do all I can to be fit.That's my only focus."