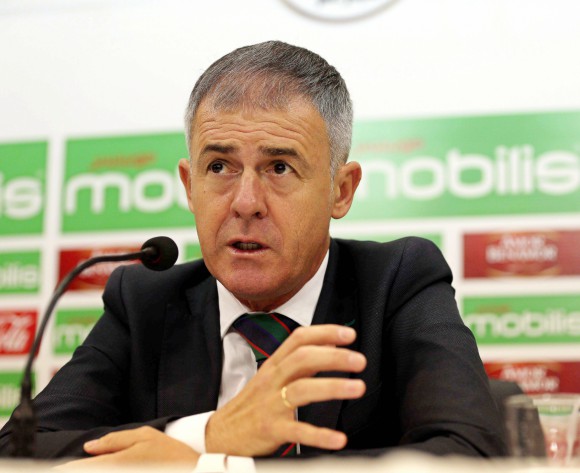 Algeria’s under-fired coach Lucas Alcaraz will be in charge of the team for at least the next two matches, according to the country’s Football Federation (FAF) president Kheireddine Zetchi.

The Spanish coach has come in for major criticism following Algeria’s elimination from the 2018 World Cup qualifiers.

Yet Alcaraz will definitely be in charge for the Fennec Foxes’ remaining matches of their Group B campaign: away to Cameroon next month and at home to Nigeria in early November.

"I am convinced of the coach's CV, but I am not convinced of the results of the Greens [national team]. It would be lying if I said the opposite. That's why we're going to let him work until the match against Nigeria,” Zetchi told ENTV, as quoted by Le Buteur.

The FAF boss has asked for patience with Alcaraz and pointed to the example of former coach Vahid Halihodzic.

The Bosnian oversaw a poor campaign at the 2013 Africa Cup of Nations in South Africa where Algeria finished bottom of their group, but went on to lead the team to World Cup qualification and a fine showing at the global finals in 2014.

"Why are we trying to sack the coach after each defeat? Why did not we sack Halilhodzic, after the South African CAN? I think stability is very important in football,” said Zetchi.

"Personally, I will look for the right solutions if I find that he is not the the situation. I will study these solutions with members of the BF. But I refuse to be rushed to sack him after only two games.”

Algeria will face Cameroon in their penultimate 2018 World Cup qualifier, with the match set for October 7 in Yaounde.