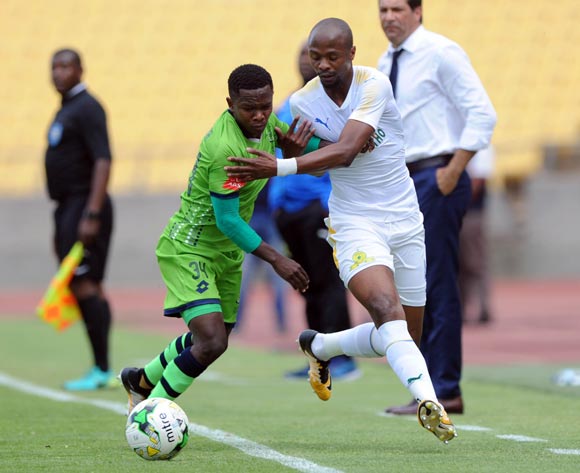 The result sees the Brazilians climb to fifth spot on the league table, while struggling Dikwena remain 16th on the standings.

Dikwena conceded just two minutes into the match after their defence was exposed and Khama Billiat capitalized from close range.

The home side was struggling to contain the Brazilians, who looked threatening each time they pushed forward in search of another goal.

Sibusiso Vilakazi, who was part of Sundowns' front three attackers, had a chance to shoot from close range in the 22nd minute, but he fired over the crossbar.

Dikwena, who had Bonginkosi Ntuli as their target-man, pushed for the equalizing goal, but they found it difficult to penetrate the Sundowns defence.

Sundowns should have doubled their lead just before the half-time break, but Mzimela pulled off a great save to deny Billiat from close range.

The first-half ended 1-0 in favour of Sundowns, who had taken an early lead in the North West Province town, Rustenburg.

The Brazilians continued to create chances in the second-half as they searched for their second goal of the match.

Tebogo Langerman, the Sundowns full-back, found some space outside the Stars box in the 54th minute and he unleashed a shot which was easily saved by Mzimela.

Botswana international Thabang Sesinyi, who was tightly marked by the Sundowns defence, was replaced by Stars' Namibian striker Benson Shilongo in the 67th minute.

Percy Tau thought he had doubled his Sundowns' lead ten minutes later after beating Mzimela with a low shot, but the South African international was ruled offside.

Stars could not snatch a late equalizing goal in the closing stages of the match and ultimately, Sundowns ran out 1-0 winners.