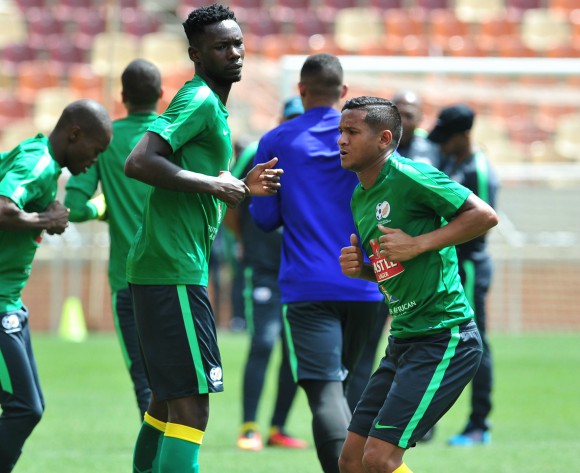 South Africa international Erick Mathoho has backed Bafana Bafana after being withdrawn from the squad to face Burkina Faso in the crucial 2018 FIFA World Cup qualifier.

The towering central defender he has to serve his two-game suspension for the red card he received in the 2-1 loss to Cape Verde last month (1 September 2017).

Motjeka Madisha of Mamelodi Sundowns has been called up to replace Kaizer Chiefs central defender Mathoho. The defender was part of the 25-man squad called up by Bafana Bafana head coach Stuart Baxter, pending a decision from the FIFA Disciplinary Committee (FDC), which sat on Friday, 28 September to deliberate on the match ban.

According to a communiqué from FIFA:

“Erick Mathoho is regarded as having breached art. 48 par. 1 c) of the FIFA Disciplinary Code by committing an act of unsporting conduct against an opponent in the scope of the match played between the representative teams Cape Verde Islands and South Africa on 1 September 2017 within the frame of the Preliminary Competition for the 2018 FIFA World Cup Russia."

The player Erick Mathoho is suspended for two matches including the automatic match suspension, which was served in the match played between the representative teams of South Africa and Cape Verde Islands on 5 September 2017.

The following match suspension has to be served during the match to be played between the representative teams of South Africa and Burkina Faso, scheduled on 7 October 2017.

The player is ordered to pay a fine in the amount of CHF 5,000 in accordance with art.10 c) and art. 15 of the FIFA Disclipinary Committee (FDC). Mathoho has once again apologised to the nation for the incident.

“Words fail me when I think of the incident and the red card itself, but from the bottom of my heart I want to once again apologise for my actions – to the entire Bafana Bafana team and all the football loving fans,” said Mathoho on the South African Football Association (SAFA) website.

“Let me also take this opportunity to wish the team all the best against Burkina Faso in this crucial match. I know it’s not going to be easy but I have confidence that they will get positive results. We did not do well in the last two matches but I believe we will rise again, starting with this upcoming clash. Good luck to all.”

Bafana assemble for camp on Sunday, 1 October and will face the Burkinabe on Saturday, 7 October 2017 at FNB Stadium. Kickoff is at 15h00.

The West Africans remain unbeaten in Group D of the 2018 FIFA World Cup qualifiers, on six points – level with Cape Verde, but Burkina Faso lead the group due to a better goal difference.

Senegal lies in third position with five points, while South Africa is bottom of the table with one point.