Zinedine Ferhat delighted to be back in Algeria’s squad 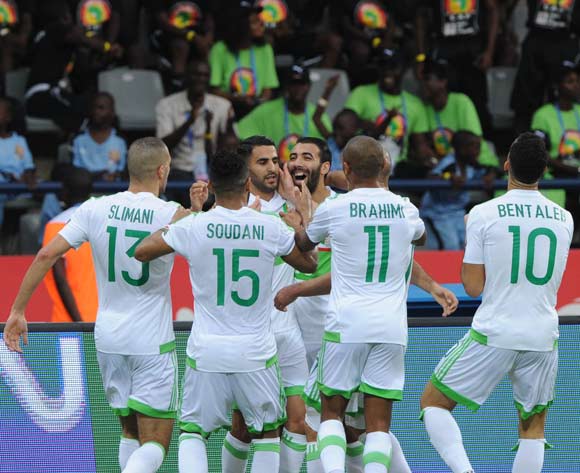 Riyad Karim Mahrez of Algeria celebrates a goal with teammates during the Afcon Group B match between Algeria and Zimbabwe on the 15 January 2017 at Franceville Stadium, Gabon Pic Sydney Mahlangu/ BackpagePix

After a lengthy absence from Algeria’s national team, midfielder Zinedine Ferhat says he has been “waiting for years” and is determined to prove his worth.

The 24-year-old was called up to the Fennec Foxes squad for their penultimate 2018 World Cup qualifier against Cameroon this weekend.

It ends a three-year period out of the team for Ferhat, who has been in fine form for French Ligue 2 club Le Havre since the start of last season.

With Algeria mathematically eliminated from the World Cup, coach Lucas Alcaraz has opted to bring in fresh players to the Fennec Foxes squad and Ferhat is the main beneficiary of this new policy.

“I have been waiting for this for years,” Ferhat told Le Buteur in an interview.

“After all that I could achieve here in France with my club, the work ended up paying.

It is first the first impression that comes back into my mind. I am very happy with this selection and I am already looking forward to joining my comrades in training in Sidi Moussa.

“I am prepared mentally, physically and technically to bring the most that Alcaraz expects of me and help my country.”

On his long absence from the team, Ferhat added, “It goes fast, it goes back a long time as you say, my sidelining has lasted too long, I hope that my setbacks are over and can now continue as long as possible in selection.

“I must first thank all the people who helped me in the difficult times.

“I do not hide from you that I went through painful periods and found only my family, my father, my mother and my brothers to overcome all these difficulties. Today, I am happy to make them proud of me.”