Geofrey Sserunkuma - Ghana will still be tough without Gyan and Ayew 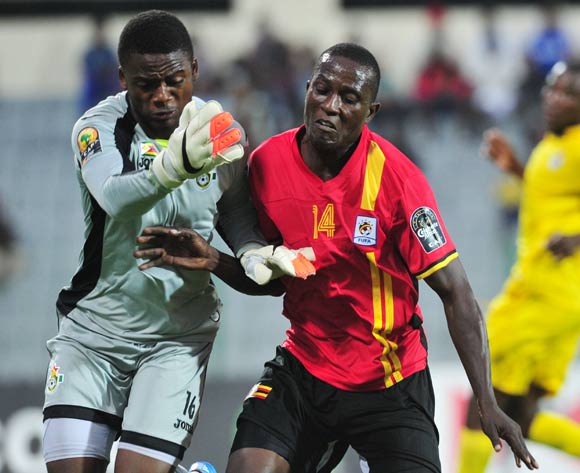 Geoffrey Sserunkuma of Uganda challenged by Tatenda Mukuruva of Zimbabwe

Ugandan striker Geofrey Sserunkuma says Ghana will be a difficult opponent when they meet on Saturday in Kampala.

The two nations will battle it out in a highly anticipated 2018 FIFA World Cup qualifier.

Sserunkuma believes the Black Stars team without Asamoah Gyan and the Ayew brothers, Andrew and Jordan, will still be difficult to match.

However, the Cranes experienced forward has urged his teammates to double up their efforts to ensure they retain the full three points.

ANYTHING CAN HAPPEN IN FOOTBALL - GHANA COACH APPIAH

Gyan was omitted from the squad heading to Kampala with an injury, but the Ayew duo was not called-up for the clash.

“I also heard the Ghanaian team has made some big changes because everyone is fighting for places,” said Sserunkuma told the Daily Monitor.

“So that makes it a very tricky game for us because previously, we knew where who played and how they played.

“You could tell that this is Asamoah Gyan, that is Andre Ayew, that is Jordan Ayew.

“But now they have brought new, young players who seem hungrier as you saw in their game in Congo (Ghana won 5-1). That calls for doubling our efforts to win on Saturday.”