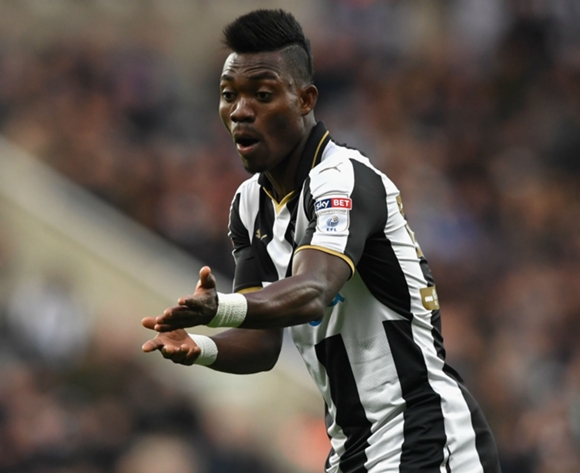 Thank you for joining us today on AfricanFootball.com for what was our LIVE African Stars Watch of players in action on the European continent on Sunday, October 15 2017.

18h55 - Stephane Sessegnon's goal for Montpellier proved to be the winner as they beat Jean Michael Seri's Nice 2-0 in the French Ligue 1.

18h50 - Sofiane Boufal and Mario Lemina's Southampton have fought back twice against Christian Atsu's Newcastle to draw 2-2 in the English Premier League.

18h45 - Tyronne Ebuehi and Wilfried Kanon's Den Haag have lost 2-1 to Excelsior in the Dutch Eredivisie.

18h40 - Montpellier have found another goal, adding to Stephane Sessegnon's opener as they lead 2-0 against Jean Michael Seri's Nice in the French Ligue 1.

18h30 - Tyronne Ebuehi and Wilfried Kanon's Den Haag have conceded a goal against Excelsior and trail 2-1 in the Dutch Eredivisie.

18h20 - Stephane Sessegnon has found the back of the net for Montpellier who lead 1-0 against Jean Michael Seri's Nice in the French Ligue 1.

18h10 - There have been two quick goals in the English Premier League. First, Mario Lemina's Southampton equalised, but Christian Atsu's Newcastle quickly re-took the lead and are now 2-1 in front.

18h05 - A brace from DR Congo's Cedric Bakambu has led Villarreal to a 2-1 win over Girona in the Spanish La Liga.

17h50 - Tyronne Ebuehi and Wilfried Kanon's Den Haag have started their second half against Excelsior in the Dutch Eredivisie. The game is locked at 1-1.

17h48 - Souleymane Camara and Stephane Sessegnon's Montpellier are drawing 0-0 against Jean Michael Seri's Nice at half time in the French Ligue 1.

17h47 - Christian Atsu's Newcastle are leading 1-0 against Mario Lemina's Southampton at half time in the English Premier League.

17h30 - Christian Atsu (Ghana)'s Newcastle United have broken the deadlock against Southampton following a goal-mouth scramble. It's 1-0 with 30 minutes played.

17h20 - Mario Lemina (Gabon) is in action for Southampton against Newcastle United, who have Christian Atsu (Ghana) on the pitch in an English Premier League match. It's 0-0 with 20 minutes played.

16h50 - Adel Taarabt (Morocco) scored for Genoa and he was substituted in the 75th minute as they beat Calgiari 3-2.

16h30 - Idrissa Gueye (Senegal) and his countryman Oumar Niasse both featured for Everton as they drew 1-1 with Brighton.

16h20 - Adel Taarabt (Morocco) and his Genoa's team-mates are now leading 2-1 after Cagliari pulled one back with 30 minutes left on the clock.

16h10 - Oumar Niasse (Senegal) has replaced his countryman Idrissa Gueye and their side, Everton are trailing 1-0 against Brighton with five minutes left on the clock.

16h00 - Marcel Tisserand (DR Congo) is in action for Wolfsburg against Bayer Leverkusen, who are leading 1-0 with 30 minutes played, in a German Bundesliga match.

15h50 - GOAL! Prejuce Nakoulma (Burkina Faso) breaks the deadlock for Nantes against Bordeaux in the stroke of half-time. The score is 1-0 to Nantes at half-time.

15h40 - GOAL! Adel Taarabt (Morocco) collects the ball and unleashes a terrific shot from the edge of the box, and it goes into the bottom left corner. It's 2-0 to Genoa against Cagliari with 40 minutes played.

15h30 - Everton, who had Idrissa Gueye (Senegal) on the pitch in the first-half, are locked at 0-0 with Brighton at half-time.

15h20 - ASSIST! Adel Taarabt (Morocco) sets up Andrey Galabinov, who makes it 1-0 to Genoa against Cagliari. It's 1-0 to Genoa with 20 minutes played.

15h10 - Simy (Nigeria) is also in action for Crotone against Torino in an Italian Serie A match. The game just began.

14h50 - Bong Gaetan (Cameroon) is on the Brighton bench, while Oumar Niasse (Senegal) is among the Everton substitutes.

14h40 - Idrissa Gueye (Senegal) is in action for Everton FC against Brighton and Hove Albion in an English Premier League game. It's still 0-0 with 10 minutes played.