Timothy Weah says his father is not overshadowing him 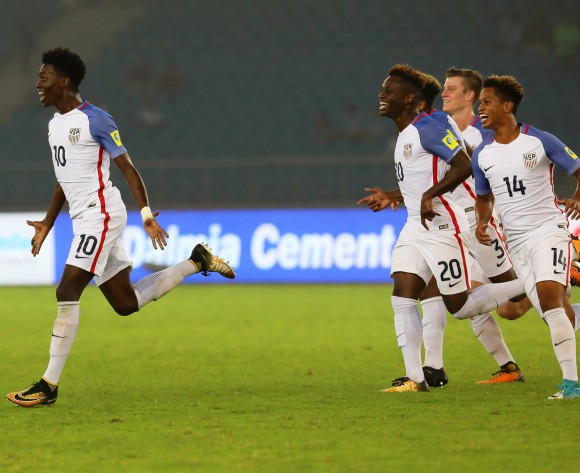 Tim Weah (L) of the USA celebrates with his teammates after scoring a goal during the FIFA Under-17 World Cup 2017 round of 16 soccer match between Paraguay and the USA at the Jawaharlal Nehru Stadium in New Delhi, India, 16 October 2017. EPA/RAJAT GUPTA


George Weah's son, Timothy Weah says he is not living in his father's shadow and feels no pressure to be as good as the Liberian football legend.

Born in New York 17 years ago, Timothy revealed what kind of advice he received from his father just before starring for the United States at the ongoing U17 FIFA World Cup in India.

Although his father failed to play at the World Cup, Timothy says he is not overawed by the prospect of following in his famous father's footsteps and that he can only profit from the situation.

The Paris St Germain player has helped the US to the quarter-finals of the youth tournament following a hat-trick in a 5-0 win over Paraguay in the Last 16 on Monday.

"I just use it as an advantage," he told BBC Sport.

"My dad was a great player and it's up to me to be the best that I can be - even if I don't make it to that extent.

"I'm still going to try to be one of the best players to play the game. Following in my father's footsteps is not a big deal to me.

"I talk to him nearly every night (in India) and he gives a little word of encouragement.

"He told me to just play my game and be myself - that is the most important thing," explained Timothy.

"He just said: 'Be free, you have nothing to prove, just prove that you are the best player and you will have a bright future."

During a prolific career in Europe with AS Monaco, AC Milan and PSG, George Weah became the only African to ever be crowned FIFA World Footballer of the Year in 1995.