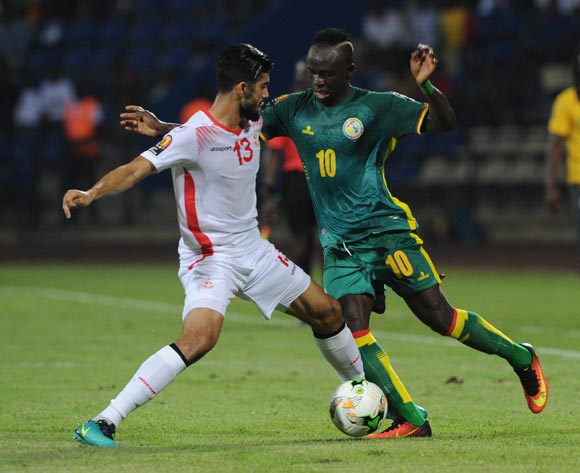 Ferjani Sassi of Tunisia challenges Sadio Mane of Senegal during the Afcon Group B match between Tunisia and Senegal on the 15 January 2017 at Franceville Stadium, Gabon Pic Sydney Mahlangu/ BackpagePix

Senegal head coach ,Aliou Cisse, is more than confident that Liverpool star Sadio Mane will be fit for the country's back-to-back 2018 FIFA World Cup qualifiers against South Africa next month.

According to reports, Mane has been included in the Lions of Teranga's squad for the double-header against Bafana Bafana, despite the Liverpool attacker currently nursing a hamstring injury.

"In my mind there's no doubt he will be with us for the double header against South Africa and that he will be 100% fit,"Cisse is quoted as saying.

"Until now, he has just been doing some individual training - running in straight lines - but from next week, he is going to train harder and start working with the ball."

It is unclear when the 25-year-old is set to return to action with the Reds initialing predicting that he will spend up to six weeks on the sidelines.

The former Southampton winger picked up said injury in Senegal's 2-0 win over Cape Verde in Praia earlier this month, as the West African's moved top of Group D.

Senegal, who are aiming to qualify for he World Cup for only the second time, face South Africa in Polokwane before the reverse fixture in Dakar a few days later.

Cisse captained Senegal to a quarterfinal place at the 2002 FIFA World Cup in South Korea/Japan.