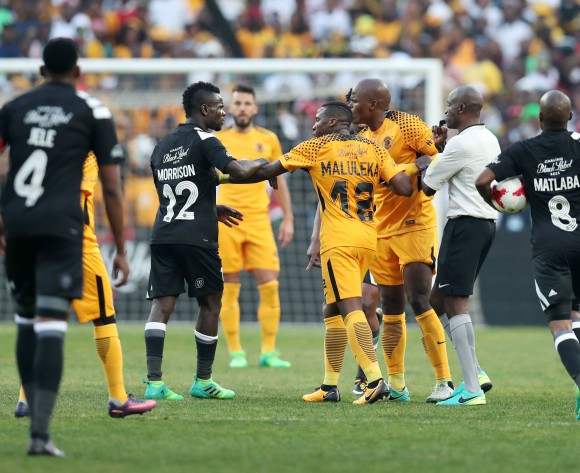 Kaizer Chiefs and Orlando Pirates will renew their famous derby rivalry in the Absa Premiership when they meet at the FNB Stadium on 21 October 2017, kick-off at 15h30.

Chiefs come into the match on the back of a 2-1 away win over Mamelodi Sundowns on October 17. The victory, which was secured by goals from Siyabonga Ngezana and Bernard Parker, was a major relief for under-pressure coach Steve Komphela.

However, home matches have not been kind to the Amakhosi thus far in the 2017/18 season: their four turns as hosts have yet to produce a league win and include surprise losses at the hands of SuperSport United and Baroka FC.

Pirates have gone three league matches without a win after they were held 1-1 at home by bottom-of-the-log Platinum Stars on October 18. The result saw the Sea Robbers lose their 100 percent record at home this season and continue their relatively lean run in terms of goal scoring - Milutin Sredojevic’s side have netted just seven times in eight league matches.

The Buccaneers have also yet to record an away win this season, picking up just three points from four games on the road. Their last away result was a 2-2 draw at Polokwane City before the recent international break.

In head-to-head stats, Chiefs and Pirates have met in 63 league matches since 1985. The Amakhosi have claimed 24 wins compared to 13 for the Buccaneers, while no less than 26 encounters have ended in draws. The team in gold and black have won 13 of their 30 home matches in the rivalry, suffering six defeats in the process.

Last season the teams shared the spoils in both league meetings: they drew 0-0 in Pirates’ home match, while the return game with Chiefs as hosts ended 1-1 after an own goal from Tsepo Masilela and a strike from Joseph Molangoane. The teams have played to three successive draws and have shared the spoils in seven of their last 10 meetings in the top flight.