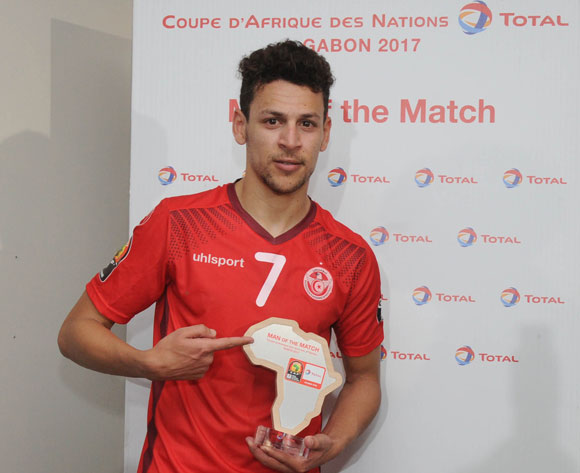 Youssef Msakni of Tunisia awarded TOTAL man of the match during the Afcon Group B match between Algeria and Tunisia on the 19 January 2017 at Franceville Stadium, Gabon Pic Sydney Mahlangu/ BackpagePix

We look at the players to watch ahead of this weekend’s round of 2018 World Cup qualifiers. Today’s focus is on Group A: Tunisia, DR Congo, Guinea and Libya.

With a hat-trick in the last round of qualifiers, who else would we pick for Tunisia? Youssef Msakni’s treble against Guinea took his team to the verge of Russia 2018, and they now need only a point at home to Libya to guarantee qualification. With Msakni as part of their attack, the Carthage Eagles will be looking to book their ticket in emphatic style.

Ahmed Azzaqah is likely to play as Libya’s first-choice goalkeeper, having manned the posts in their 2-1 loss to DRC last time out. The Mediterranean Knights have shipped seven goals in two away games in this group and it will be up to Azzaqah and the defence in front of him to put up a more resilient showing against Tunisia.

With prolific striker Cedric Bakambu out of the clash against Guinea due to suspension, the burden of leading DRC’s attack will likely fall on Ndombe Mubele. The 23-year-old has been in decent form for Rennes in France and will hope to add to his tally of nine international goals, the latest of which arrived against Libya last month.

Guinea have nothing to play for in their clash against DR Congo, but they will still look to Francois Kamano for inspiration. The 21-year-old Bordeaux striker has made a habit of scoring against big-names in Guinea colours (he has netted against Cameroon and Ivory Coast during his international career) and will hope to continue that trend against the Leopards.