That's all from Russia where we witnessed the draw for the #FIFAWorldCup2018.


Nigeria are the last African team to be drawn. They are in Group D along side Iceland, Croatia and Argentina, who recently lost to Nigeria in a friendly match.

Group D is also complete and African side Morocco have joined Spain, Iran and Portugal.

We are done with Group A  which features Egypt, Russia, Saudi Arabia and Uruguay, who won the first ever World Cup tournament as hosts.

Senegal, who qualified for the World Cup for the first time in 16 years, are drawn into Group H. They join Poland and Colombia.

African side Tunisia are drawn into Group G. They will play their first game against England.

Pot 3 side Egypt are the first African nation to be drawn. They join Uruguay and Russia in Group A.

Pot 2 teams Peru and Croatia join France, and Argentina in Group C and Group D respectively. While Switzerland and Mexico join Brazil, and Germany in Group D and E respectively.

We are done with Pot 1. Pot 2's Uruguay join Russia in Group A, while Spain join Portugal in Group B.

The draw has finally started. Russia, who are the host nation, automatically go into Group A.

England legend Gary Lineker explaining how the #FIFAWorldCup2018 will be conducted.

The trophy has arrived! Legendary German striker Miroslav Klose brought it on stage. He is the top goalscorer in the history of the FIFA World Cup having scored 16 goals in the global tournament.

We are just a few minutes away from the #FIFAWorldCup2018. Five African teams have qualified for next year's tournament.

The Nigeria Football Federation official delegation are present at the #FIFAWorldCup2018 draw in Moscow. 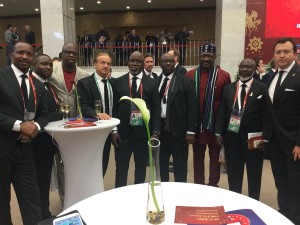 The teams are placed in pots one to four from highest to lowest FIFA ranking with the exception of Russia, the lowest-ranked team in the tournament, who are automatically placed in pot one alongside the top seeds.

Hello and welcome to our live coverage of the 2018 FIFA World Cup draw which takes place today at 17:00 CAT (18:00 local time) from the Kremlin in Moscow, Russia.

PLAYER SPOTLIGHT: Sadio Mane - Why he is very important to Liverpool

Gernot Rohr has scouted a Nigerian keeper in Germany