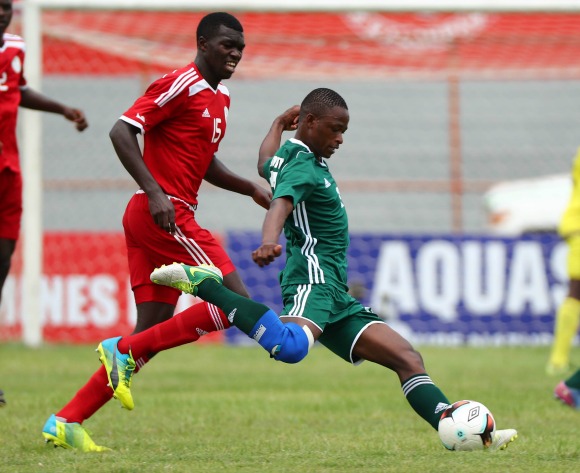 Raboama Koloti of Lesotho evades challenge from Lubeni Haukongo of Namibia during the 2017 COSAFA U20 football match between Namibia and Lesotho at Nkana Stadium, Kitwe on 10 December 2017 ©Chris Ricco/BackpagePix

Lesotho will be hoping to qualify for the knockout stages of the U20 2017 COSAFA Cup when they take on Angola at the Arthur Davies Stadium in Kitwe on Tuesday.

Likuena currently sit top of Group C - locked on four points with six-time champions Zimbabwe and a point above Namibia who take on the Young Warriors at the same time on Tuesday afternoon.

Lesotho, who last reached the final four of the Southern African competition in 2005, held Zimbabwe to a goalless draw in their opener before beating Namibia 2-1 over the past weekend.

Angola, who lost in three successive COSAFA Cup finals at the turn of the century, have already been eliminated following defeats to Namibia and Zimbabwe.

Only the group leader is guaranteed a place in the final four at the on-going showpiece in Zambia.