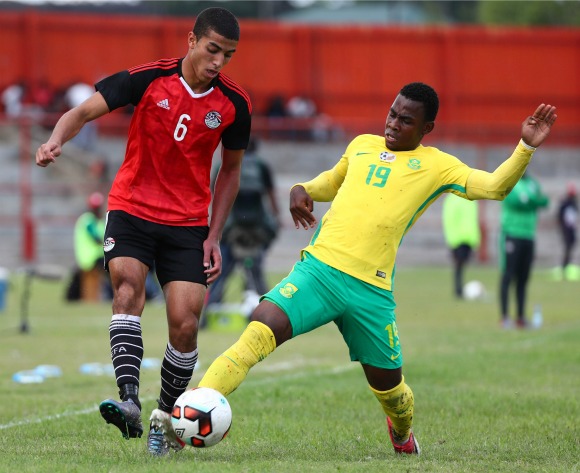 Mohamed Ahmed of Egypt tackled by Luvuyo Mkatshana of South Africa during the 2017 COSAFA U20 football match between South Africa and Egypt at Nkana Stadium, Kitwe on 11 December 2017 ©Chris Ricco/BackpagePix

South Africa have booked a place in the semifinals of the 2017 U-20 Cosafa Cup after defeating Egypt 2-1 on Monday afternoon.

The result at the Nkana Stadium saw Amajita claim first place in Group B and a berth in Thursday’s semifinals.

Egypt finished second on the standings but still have a chance of progressing into the final four as the best runner-up.

The North Africans claimed the lead in this group decider, with Mohamed Karem opening the scoring in the 18th minute.

South Africa hit back just before the hour mark through Nkosingiphile Ngcobo to leave the teams deadlocked in both the match and the group standings.

But any need for a tie-breaker was forgotten on 72 minutes when striker Luvoyo Mkatshana netted his second goal of the tournament to secure a 2-1 victory for Amajita.

South Africa finished top of Group B with a full haul of nine points, while Egypt were second with six.

The North Africans are already ranked higher than Group A’s second team, Malawi (who claimed five points) and will hope that they are not overhauled when Group C is wrapped up tomorrow.