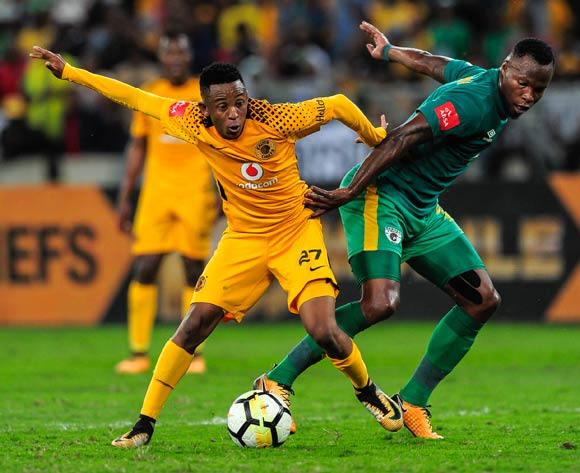 Hendrick Ekstein of Kaizer Chiefs FC and Letladi Madubanya of Baroka FC fight it out for the ball during the Absa Premiership 2017/18 football match between Kaizer Chiefs and Baroka FC at Moses Mabhida Stadium, Durban on 30 September 2017 ©Gerald Duraan/BackpagePix

Baroka FC and Kaizer Chiefs will meet for an eagerly-anticipated Absa Premiership clash at the Peter Mokaba Stadium on 21 January 2018, kick-off at 15h30.
Baroka claimed their first win of the New Year when they defeated AmaZulu 2-0 at home on January 14. The Limpopo side recovered strongly from their 3-1 loss away to Orlando Pirates earlier this month to keep alive their hopes of a top-eight finish.

Bakgaga have claimed 13 points from eight home matches this season and are chasing a hat-trick of wins as hosts, with their victory over AmaZulu last weekend preceded by a triumph over SuperSport United at the Peter Mokaba Stadium at the back end of last year.

Chiefs extended their unbeaten run to four matches - with a return of 10 points from a possible 12 in the sequence - thanks to a 2-1 home win over Polokwane City on January 13. It was just the second home win this season for the Soweto giants.

The Amakhosi have claimed 16 points from nine away matches this season, with their only defeat coming in the Eastern Cape against Chippa United early last month. Their last game on the road was a goalless draw at SuperSport United.

In head-to-head stats, Baroka and Chiefs have met in three league matches since 2016/17. Both of last season’s matches ended in draws, while the teams’ meeting earlier this campaign saw Bakgaga claim a come-from-behind 2-1 win thanks to goals from Lewis Macha and Gift Motupa.