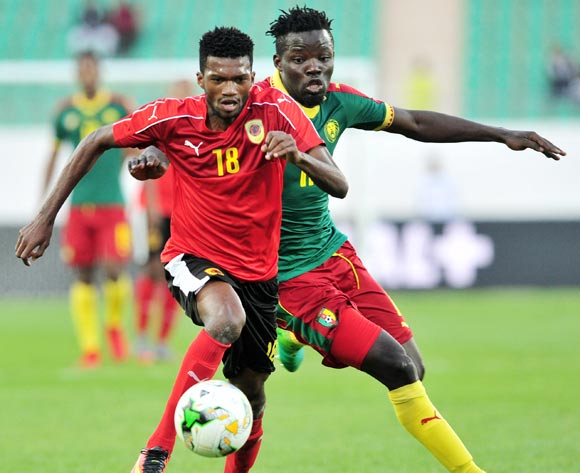 Herenilson Do Carmo of Angola is challenged by Willy Namedji of Cameroon during the 2018 Chan game between Angola and Cameroon at Le Grand Stade Agadir in Agadir, Morocco on 20 January 2018 © Ryan Wilkisky/BackpagePix

Cameroon have suffered a second loss at the 2018 CAF African Nations Champions after losing 1-0 to Angola at Stade Adra in Morocco on Saturday.

The loss means coach Rigobert Song's men are condemned to the bottom with no points next to their name.

For the Angolans, they netted through Ricardo Estevao, whose penalty separated the two nations.

Although there were few and opportunities in front of goal in the first 15 minutes, Bitang tried to test Angola’s Landu Mavanga from a distance, yet his effort sailed wide.

The Palancas Negras were awarded a penalty when Owundi Eko’o fouled Vladimir Felix in the box and the referee did not hesitate to point to the spot.

Skipper Estevao ensured he picked the right spot to convert from the penalty area to hand the Angolans the lead in the 30th minute.

The Indomitable Lions pushed for an equaliser, but it was 1-0 at the interval in favour of the Southern Africans.

Angola came back from the tunnel and probed for more opportunities and had a set piece in the 51st minute.

Despite the African champions fighting hard to gain total dominance in the encounter, they could not break down the solid Angolan defence.

With six minutes to go, coach Rigobert Song’s men nearly scored when Alphonse Tientcheu unleashed a rocket away from the d-line aiming for the top left corner, but Mavanga was equal to the task and punched the ball away for a corner.

Resulting from this hard fought win, the Southern Africans now sit at the summit in the group with four points from two games.

Mauritania and Guinea fight for pride in Marrakech