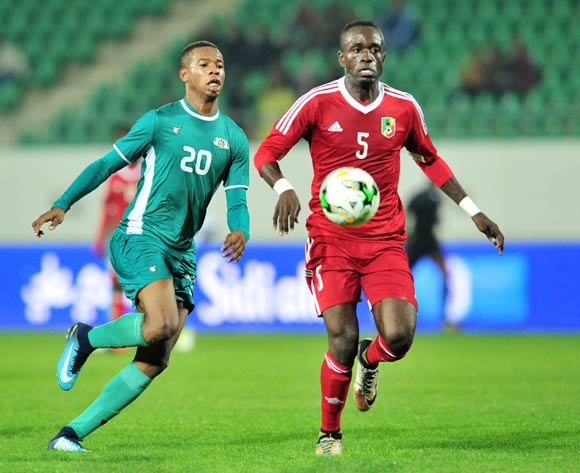 Nathanio Kompaore of Burkina Faso and Carof Bakoua of Congo give chase during the 2018 Chan game between Congo and Burkina Faso at Le Grand Stade Agadir in Agadir, Morocco on 20 January 2018 © Ryan Wilkisky/BackpagePix

Burkina Faso suffered a major blow to their chances of advancing to the knockout stages of the 2018 CAF African Nations Championship (Chan) after losing 2-0 to Congo at Stade Adrar on Saturday night.

The first loss of the campaign for the Burkinabe condemns them to the third spot in Group D with one point next to their name.

For the Congolese, goals from Carof Bakoua and Georges Bidimbou were enough to book a spot in the quarterfinals.

Congo headed into this encounter chasing their second win in two games and were rightfully motivated from the start of the encounter.

However it was Malo Traore’s side who had chances to grab the lead early on, but they were not clinical in the final third as they fired blanks.

With few and far opportunities in the opening half, it was no surprise that it was 0-0 at the interval.

The Red Devils were on top of their game in the second half as they added numbers in the Stallions' box, but could not break their solid defence.

Congolese goalkeeper Mouko showed his class to stop Burkina Faso in the 57th minute as he rushed off his line to deny Romeo Boni from close range.

Moments later, Bakoua would find the back of the net when he brilliantly tapped in a cross from the right flank to hand Congo the lead in the 67th minute.

With seven minutes left, Burkina Faso substitute Moise Zongo wasted a glorious opportunity from a set-piece when he could only succeed in guiding his effort straight into the stands.

In injury time, Bidimbou made it 2-0 when he came off the bench to head home, subsequently cementing Congo's spot in the quarter-finals of the competition.

Resulting from the win, Congo now sit at number one in the group with six points from two wins.