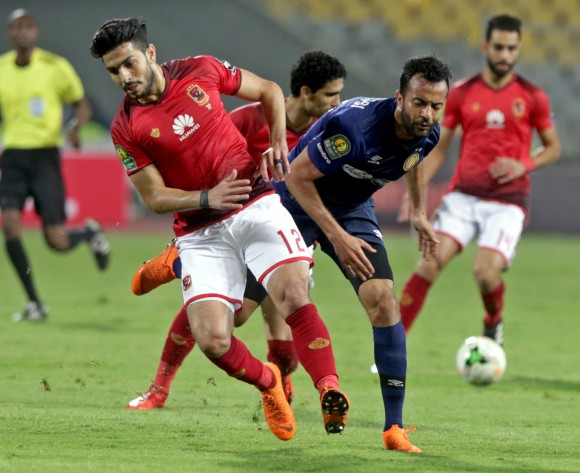 Esperance de Tunis frustrated wasteful Al Ahly in the 2018 CAF Champions League Group A match which ended in a 0-0 draw at the Borg El Arab Stadium in Alexndria on Friday night.

The draw sees Egyptian giants Al Ahly and Esperance of Tunisia are placed second, and third respectively on the Group A standings after match day one.

The Pharoahs started the match well and they should have grabbed an early lead following a good move in the fourth minute.

Walid Soliman played a good cross for Phakamani Mahlambi, who fired over the crossbar from a promising position.

The Blood and Gold defence which was led by experienced defender Khalil Chemmam looked solid most of the time.

Al Ahly suffered a blow on the half-hour mark as Amr El-Sulaya sustained a muscular injury and he was replaced by Mohamed Hany.

Esperance continued to frustrate the Al Ahly attackers with the half-time fast approaching.

The score was 0-0 at the interval following an evenly contested first-half between the two North African giants.

Hany found South Africa international Mahlambi with a good cross, but the latter fired wide of the target.

The Red Devils continued to press the Blood and Gold, who had looked organized at the back.

But the Esperance defence was penetrated in the 64th minute and Marwan Mohsen managed to score, but the goal was disallowed as the attacker offside.

Al Ahly head coach Hossam El-Badry then decided to pull out wasteful Mahlambi and he introduced Islam Mohareb as the hosts searched for a late goal.

However, Esperance defended well in the latter stages of the game and ultimately, the match ended in a goalless stalemate.

Enyimba out to dispatch Djoliba