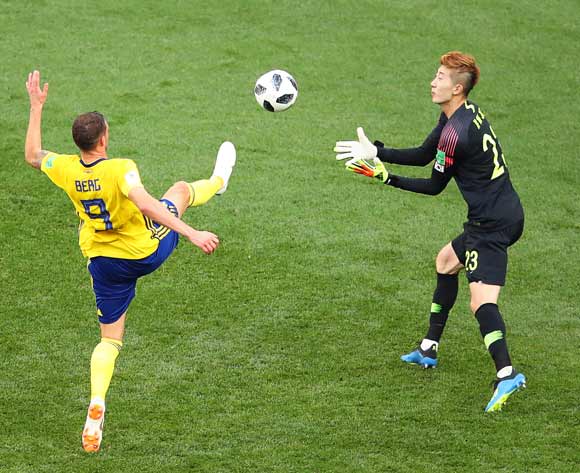 Sweden secured a 1-0 win over a stubborn Korea Republic side in their opening Group F match of the 2018 FIFA World Cup at Nizhny Novgorod Stadium on Monday afternoon.

However, it was the Koreans who had an upper hand in the opening 10 minutes but they could not trouble Robin Olsen between the posts for Sweden.

In the 20th minute, the Swedes fought for dominance and came close to breaking the deadlock when goalkeeper Hyeonwoo Jo denied Marcus Berg from close range.

Sweden showed great touches and movement heading into the Korean’s half, yet they could not be decisive in the box as they fired blanks.

On the stroke of half time, Sebastian Larsson would see his header sailing over the cross bar from a decent cross on the right wing.

Coming back for the second stanza, Korea attacked in search of an opening goal and it was Koo-Ja Cheol who threatened with a free header in the 50th minute but it went inches wide.

The Video Assistant Referees were called in to decide on a penalty after Korea’s Kim Min-woo appeared to have fouled Vikto Claesson in the box just after the hour mark.

After the referee consulted the VAR team, he decided to point to the spot and skipper Andreas Granqvist converted to break the deadlock in the 65th minute, 1-0.

The final stages of the encounter could not yield the desired results for the Asians despite introducing new faces to change the game and throwing players forward.

Sweden now sit joint first in the group with Mexico, whilst the Korea Republic have zero points along with Germany.

Iran out to upset 2010 world champions in Kazan