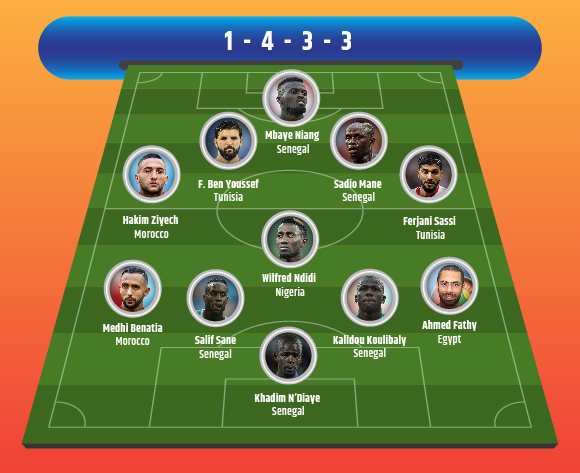 Excluding Egypt's clash against Russia on Tuesday night and Morocco's match against Portugal on Wednesday, African Football presents the best African team after the first round of matches at the 2018 World Cup.

We’ve seen some great goalkeeping from African glovesmen at this tournament, but Khadim N’Diaye’s performance stands out for its composure under pressure late in their win over Poland.

The Pharaohs were unimpressive in their opening game against Uruguay, but right-back Ahmed Fathy caught the eye with a tireless performance getting up and down the flank.

Arguably the outstanding player in Senegal’s victory over Poland, Salif Sane was the immovable object in the ‘Teranga Lions’ defence.

And almost the equal to Sane was his central defensive partner Kalidou Koulibaly, who only enhanced his burgeoning reputation as one of the best up-and-coming centre-backs.

Morocco have may have conceded a late goal to suffer a surprise defeat to Iran, but captain and centre-back Medhi Benatia still enjoyed a strong showing on his World Cup debut.

The Ajax player has a reputation as a classy playmaker and his performance against Iran only ramped up speculation that he will be on his way to a European giant such as Roma or Liverpool.

Perhaps the only Nigerian player to emerge with any credit from their 2-0 loss to Croatia, Wilfred Ndidi’s star continues to rise.

The scorer of the first African goal at the 2018 World Cup, Ferjani Sassi coolly converted his penalty against England and gave a fine performance in the middle of the park.

His almost hilarious acting to win a penalty against Kyle Walker aside, Fakhereedine Ben Youssef was a thorn in the side of England’s defence and caught the eye with a strong showing.

His goal against Poland had more than a little fortune about it, but Niang still put in a hard-running showing and will be feared by both Japan and Colombia in upcoming games.

Not as influential in attacking terms as Senegal fans would have liked, Sadio Mane still impressed with some flashes of brilliance and searing pace against Poland, and his selfless play allowed others to shine.