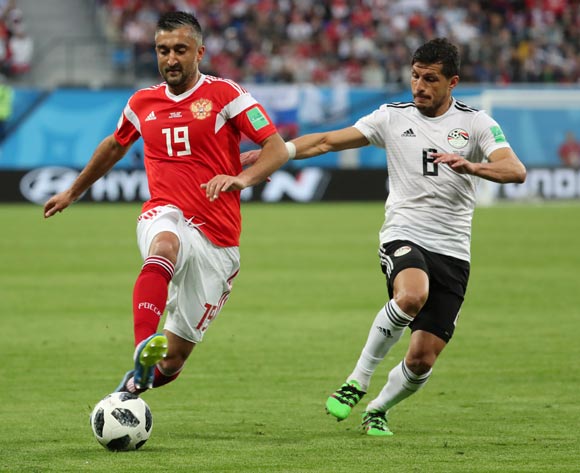 Aleksandr Samedov (L) of Russia and Tarek Hamed of Egypt in action during the FIFA World Cup 2018 group A preliminary round soccer match between Russia and Egypt in St.Petersburg, Russia, 19 June 2018.

Egypt international Tarek Hamed has extended his contract with Zamalek amid reported interest from Pyramids FC.

The 29-year-old midfielder, who represented his country at the 2018 FIFA World Cup finals in Russia, was offered a new deal by the White Knights and he signed it.

Zamalek’s Egyptain Premier League rivals Pyramids are reportedly keen to snap up the 29-year-old midfield enforcer ahead of the new 2018/19 campaign.

The White Knights released the following statement regarding Hamed:

A club statement read: “Tariq Hamed, the midfielder of the club's first football team, has demanded that the club increase the financial reward before renewing his contract with the White Castle.”

“Hamed met the club president, advisor Mortada Mansour, and assured him of his desire to continue the white castle and welcomed the president of the club, who confirmed Zamalek desire to retain it, but the player stipulated the appropriate financial estimate.”

“The club president gave the player until today after studying the offer by Zamalek and asked him to take into account the appreciation of the club and the white castle crowd.”

“Mansour stressed that the player will decide his fate today either by renewing the new contracts or by offering an external offer, especially if he signed a penalty clause for 2 million dollars and in case of its application, Zamalek would welcome the departure of the player at the time.”

“Tariq Hamed's contract ends next season and he has the right to sign for any club in January.”