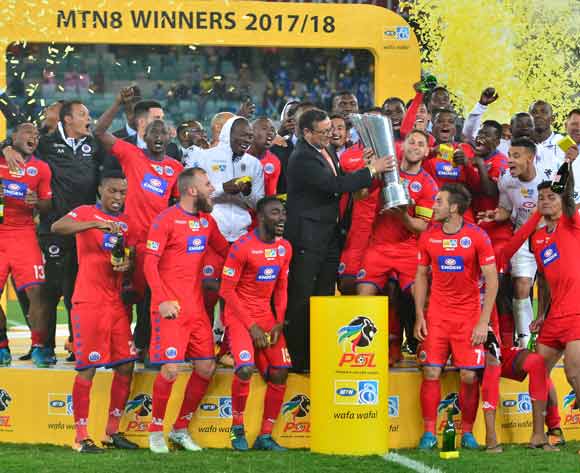 MTN in conjunction with the South African Premier Soccer League transformed the robust Johannesburg Park Station to a yellow terminal as they launched the 2018 MTN8 Wafa Wafa tournament on Monday, July 30.

The 2018/19 edition of the popular tournament will kick off on Saturday, August 11 when the defending champions, SuperSport United begin their title defence.

MTN8 is contested by clubs that finished inside the top eight bracket during the 2017/18 Absa Premiership, all competing for the coveted prize of R8 million.

PSL Chief Executive, Mato Madlala said: “The 2018 edition of the MTN8 is a call to our football supporters to bring passion to the stadiums. Passion is something that has been at the centre of our football even during the darkest days of our journey. The call by our partners MTN will resonate with our enthusiastic supporters of the beautiful game.

“We are excited to be part of this passion-filled journey that I’m sure will once again create memories for our emotional owners – the fans – in 2018/19 MTN8 competition. We cannot wait for 11 August 2018 when we kick-off the competition.”

In true MTN8 fashion, the teams will not be the only ones winning big. This year, MTN decided to up the ante in its 11th year by reminding football fans and consumers that participating in this year’s MTN8 campaign means standing a chance to win big.

Bring winning closer with Wafa Wafa means that through MTN8 and the popular “Recharge and Win” element, football fans and consumers will stand a chance to win their share in prizes worth R8 million, from weekly prizes of handsets, grocery vouchers, electronic goods to VIP experiences at the MTN8 final.

The popular Last Fan Standing competition is also back and refreshed in 2018 and will see football fans battling it out Wafa Wafa style to stand a chance to win the grand prize of R1 million and a trip to watch any football match, anywhere in the world with seven of their friends or family.

“MTN is celebrating 11 years of Wafa Wafa this year and we could not have reached this milestone without your support. It gives us great satisfaction and joy to know that MTN8 has become such a significant tournament in the local football scene,” said Mapula Bodibe, Executive Consumer at MTN SA.

“As you know the MTN8 has always been about rewarding teams and football fans alike and this year is no different. This year’s campaign is ‘Bring winning closer with Wafa Wafa’ and through this we are demonstrating how easy it is for MTN customers and football fans to win a share in the R8 million in prizes.”

- R 8 million in prizes throughout the MTN8 Tournament

The MTN8 Tournament Dates are as follows: