Following their 1-0 loss to league champions Mamelodi Sundowns on Saturday, 11 May Free State Stars were relegated from the South African Absa Premiership.

Below are some disastrous stats from their season:

- Free Stars Stars have suffered relegation from the Absa Premiership for the second time – the first was when they finished bottom of the 2005/06 log.

- Fittingly, Stars had the worst defence in the league this season, conceding 47 goals from their 30 matches.

- Their attack registered 31 goals, a better tally than all of the other four teams who were in the relegation mix heading into the final day of the campaign.

- Stars claimed just one win in their last nine league matches of the 2018/19 season.

- Congolese attacker Harris Tchilimbou was their leading goal scorer, with six strikes in the campaign. 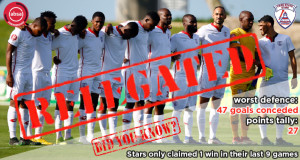 Disastrous end to Chiefs season as they finish 9th