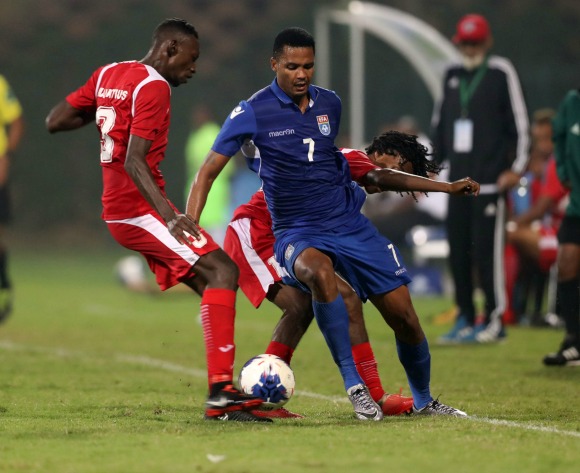 Felix Badenhorst of Eswatini challenged by Adrien Francois and Louis Dorza of Mauritius during the 2019 Cosafa Cup Match between ESwatini and Mauritius at King Zwelithini Stadium, Durban on 25 May 2019 ©Samuel Shivambu/BackpagePix

Eswatini forward Felix Badenhorst became the joint leading goal-scorer in the history of the COSAFA Cup on Monday, but could not guide his side to victory as they played to a 2-2 draw with Comoros Islands at the King Zwelithini Stadium.

Badenhorst scored his eighth goal in the COSAFA Cup to draw level with Zimbabwe legend Peter Ndlovu, and also struck the post in what ultimately proved a frustrating evening.

Eswatini have now completed their two pool matches and have two points to show for their efforts. It means victory for either Mauritius or Comoros in the final pool match on Wednesday will see them top the group.

Sabelo Ndzinisa netted the opener for Eswatini on Monday, while Boina Bacar Raidou and Youssouf Ibroihim found the back of the net for Comoros in another lively encounter in this year’s competition.

Ndzinisa had an excellent chance to break the deadlock inside two minutes when he had a free header at the back post, but the man in the distinctive rugby skullcap could only steer the ball wide.
Comoros were given another warning shortly afterwards when the usually accurate Felix Badenhorst headed beyond the far post when he had the whole goal to aim at from another free header.

The islanders were offering little going forward, but did create a headed chance for Fasoiha Goula Soilihi, but his effort was weak and easy for Eswatini goalkeeper Sandanezwe Mathabela. The deadlock was broken on 32 minutes as Ndzinisa picked up a superb cross-field ball and worked his way into the box before blasting into the back of the net.

Eswatini looked in total control at the time, but allowed Comoros to find an equaliser as Raidou picked up the ball 30-yards from goal and rifled in a superb long-range effort.
Eswatini were back in front five minutes into the second period as their chief goalscoring threat Badenhorst smashed the ball home from just inside the box for his record-equalling goal. But again the side could not hold onto the lead and within three minutes Comoros were level again, a neat turn and shot in the box from Youssouf Ibroihim was too much for Mathabela.

Badenhorst headed wide shortly afterwards, and later smashed the ball against the post with a low drive that easily beat the goalkeeper.

The non-stop action continues on Tuesday with two matches in Group B, including a crunch clash between Namibia and Malawi (kick-off 17h30 local; 15h30 GMT).

Both sides won their openers on Sunday and for the victor in this game, it would be a major step towards the quarterfinals and a meeting with Zambia. It will be the first time they clash in the COSAFA Cup in 11 years, and the first meeting of any sort since 2013 with Malawi’s attacking duo of Gabadinho Mhango and Richard Mbulu seeking to do the damage for The Flames.

Before that, Seychelles and Mozambique will seek to keep their tournament alive when they clash at the same venue (kick-off 15h00 local; 13h00 GMT).

A draw will likely not be good enough for the teams, meaning they will have to go all out on attack and that should make for a lively contest. 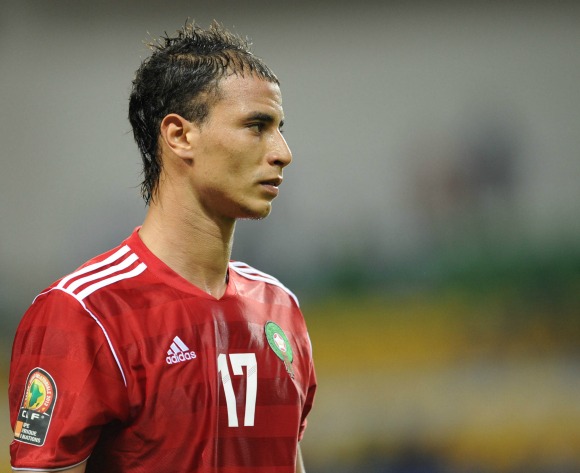 Chamakh officially hangs up his boots