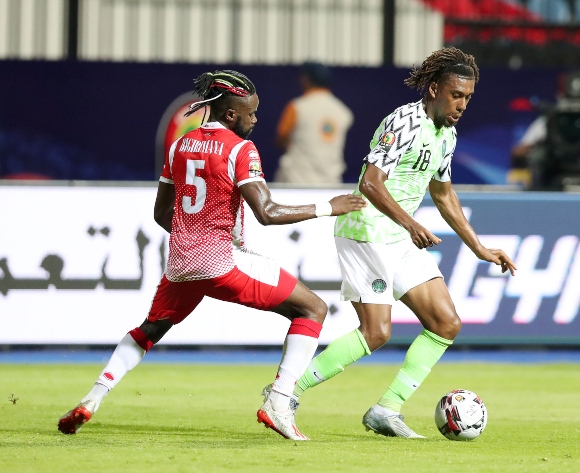 Alexander Iwobi of Nigeria challenged by Gael Bigirimana of Burundi

Welcome to AfricanFootball.com for our LIVE coverage of the 2019 Africa Cup of Nations clash between Nigeria and Burundi on Saturday 22 June 2019.

This Group B clash comes to you from the Alexandria Stadium.

Here are the line-ups:

90+3’ - Full time. Nigeria 1-0 Burundi. The Super Eagles have done it, edging the Swallows thanks to a goal from ‘super sub’ Ighalo!

90+2’ - Substitution: Mohamed Amissi replaces Berahino in the last change of the game.

87’ - Ighalo with a long-range shot... just over the crossbar. The China-based striker has made a massive difference to Nigeria’s attack. He’ll surely start their next game against Guinea on Wednesday.

85’ - Half chances for Burundi from a corner kick, but their hopes end with Omeruo taking a knock the head from an overhead kick by Nduwarugira.

83’ - An awkward landing for Omeruo, but he shakes off the injury and carries on.

78’ - Burundi almost force an equaliser after some shaky goalkeeping from Akpeyi! This game is not in the bag for Nigeria just yet.

78’ - Burundi almost force an equaliser after some shaky goalkeeping from Akpeyi! This game is not in the bag for Nigeria just yet.

77’ - Goal! Nigeria 1-0 Burundi. Finally the breakthrough for Nigeria! Aina with a great back-heel to put Igahlo in behind the defence and the striker provides a perfect finish to break the deadlock!

67’ - Sustained pressure from Nigeria, but Burundi’s defence holds firm. We’ve also reached the midway point of the second half.

56’ - Nigeria have Ahmed Musa warming up... the Super Eagles will hope he can make a big difference in this stalemate.

49’ - Promising signs from Burundi early in the second half, they look ready to take the game to Nigeria.

46’ - Back underway in the second half. No changes from either team at the break.

45+3’ - Half time. Nigeria 0-0 Burundi. The Swallows have more than held their own against Nigeria in their AFCON debut.

40’ - A worry for Nigeria as Shehu is stretchered off with injury. Looks like the end of his evening.

37’ - A Swallows free kick finds the head of Nsabiyumva, who sees his header touched onto the crossbar by Akpeyi! The rebound falls for the same player, but he blasts it over the top.

35’ - Mikel with a free header from a corner kick but he fails to hit the target.

34’ - Iwobi with a dangerous cross which just evades the head of Onuachu, before Burundi get forward on the break and Berahino nearly opens up the Super Eagles defence.

29’ - Bigirimana with a sweet strike direct from a long-range free kick and Akpeyi somewhat unconvincingly makes the save.

26’ - Onuachu with a shot on the turn from the edge of the penalty area, but he scuffs the effort and Nahimana makes an easy save.

23’ - Past the midway point of the first half. Still 0-0 between Nigeria and Burundi.

19’ - Clumsy play from Akpeyi this time, as he allows a back-pass to slip by him and gift Burundi a corner kick. Fortunately for the ‘keeper the set piece is well defended by the men in green.

14’ - Burundi then go up the other end and carve Nigeria’s defence wide open, with Cedric gifted a great chance to score but he is denied from close range by goalkeeper Akpeyi! End-to-end stuff in Alexandria!

13’ - Nigeria have the first effort on target: a long throw-in is flicked on by Mikel and Onuachu heads on target, only for Nahimana to make a save!

9’ - The first corner kick goes to the Super Eagles. Chukwueze’s cross finds Onuachu, but the striker’s header is well wide.

8’ - Nigeria now beginning to stamp their authority on the game. Chukwueze and Iwobi look particularly dangerous down the flanks.

5’ - Nigeria’s tall striker Onuachu gets his first sight of goal as he meets a cross from the left flank, but his off-target header is easily claimed by the goalkeeper.

3’ - Good work in the early minutes from Burundi, who are pressing high up the pitch and looking to force Nigeria onto the back foot.

1’ - Kick-off! We are underway in Alexandria, with Nigeria donning a kit of lime green, black and white, while Burundi wear red and white.