Kaizer Chiefs will return to Absa Premiership action after a three-week break from the league when they host Maritzburg United at FNB Stadium on Saturday 15 February 2020, kick-off at 18h00.

Chiefs were last in league action on January 25 when they claimed a 1-0 win away to Golden Arrows, with Lebogang Manyama netting deep in injury time to secure all three points. The Amakhosi have claimed 19 points from eight home matches so far this season.

Maritzburg, meanwhile, were in league action as recently as February 12, claiming a 1-0 away win over Bidvest Wits thanks to a goal from Thabiso Kutumela – a result which further aids Chiefs’ title push. The Team of Choice has claimed 14 points from 11 away matches in 2019/20.

In head-to-head stats, Maritzburg and Chiefs have met in 27 league matches since 2005/06. The Amakhosi have claimed 13 wins compared to five for the Team of Choice, while nine matches have been drawn. The Soweto side has recorded nine wins, two draws and two defeats in 13 home matches in the rivalry.

When the teams met earlier this season, at the Harry Gwala Stadium in December 2019, they played out a 1-1 draw with goals from Judas Moseamedi and Lebogang Manyama. The last three league matches between these clubs have produced just three goals. 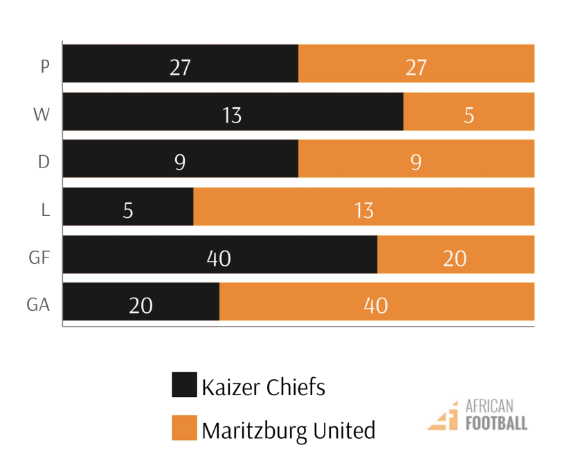