Durban derby rivals AmaZulu and Golden Arrows will meet for an Absa Premiership clash at the King’s Park Stadium on Saturday 15 February 2020, kick-off at 20h15.

AmaZulu broke a five-game winless streak in the league when they defeated Polokwane City 1-0 at home on February 2 – Bonginkosi Ntuli’s goal gave them a crucial victory in their survival battle. Usuthu have claimed 11 points from 10 home matches so far this season.

Arrows claimed a seventh win of the season when an own goal from Luke Fleurs saw them defeat SuperSport United 1-0 at home on February 1. Abafana Bes’thende have claimed just seven points from 10 away matches in the 2019/20 campaign.

In head-to-head stats, Arrows and AmaZulu have met in 25 league matches since 2001/02. Usuthu have claimed 11 wins compared to nine for Abafana Bes’thende, while five matches have been drawn. The team clad in green and white has recorded six wins, three draws and three defeats from 12 matches as hosts in this rivalry.

When the teams met earlier this season, at Sugar Ray Xulu Stadium in September 2019, they played out a 1-1 draw with penalties from Nduduzo Sibiya and Bonginkosi Ntuli. Usuthu have won seven of the last 11 league meetings of the teams. 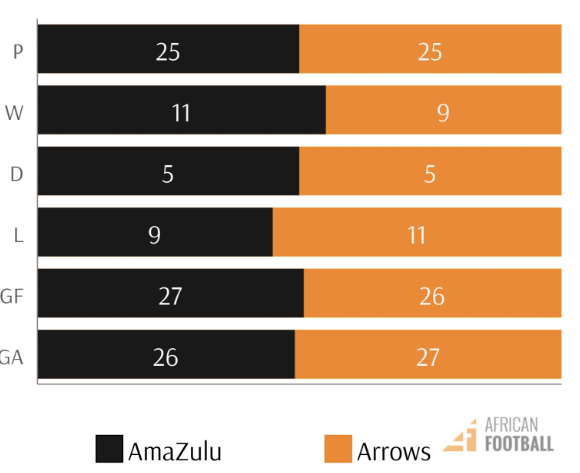