Mamelodi Sundowns will look to return to Absa Premiership action with a bang when they host Chippa United at Loftus Versfeld Stadium on Saturday 15 February 2020, kick-off at 15h30.

Sundowns were last in domestic league action on January 19 when goals from Themba Zwane and Thapelo Morena secured a 2-1 away win over Tshwane rivals SuperSport United. The Brazilians have claimed 20 points from nine home matches in the 2019/20 season.

Chippa suffered a second successive league loss when they went down 2-1 at home to Orlando Pirates on February 1. The Chilli Boys have gone four matches without a win and have taken just 10 points from as many away games this term.

In head-to-head stats, Chippa and Sundowns have met in 13 league matches since 2012/13. The Brazilians boast an unbeaten record in the sequence, with seven wins and six draws recorded. The Tshwane side has claimed five wins and one draw from six matches as hosts in the rivalry.

When the teams met earlier this season, at the Nelson Mandela Bay Stadium in August 2019, they played out a 1-1 draw with goals from Meshack Maphangule and Lebohang Maboe. 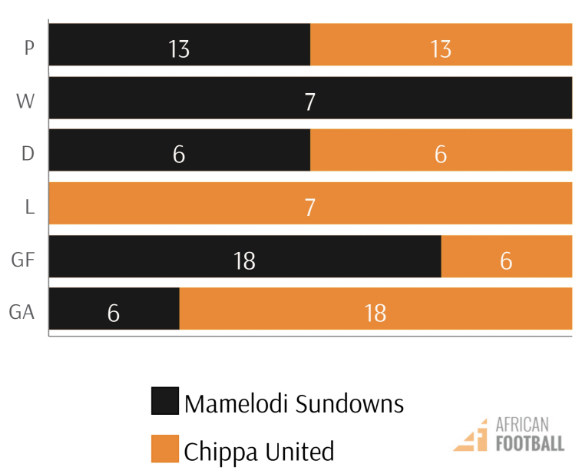