Black Leopards will look to end Orlando Pirates’ strong run in the Absa Premiership when the teams meet at Thohoyandou Stadium on Sunday 16 February 2020, kick-off at 15h30.

Leopards come into the clash on the back of a 2-1 win over Stellenbosch on February 2 (breaking a seven-game winless streak in the process), thanks to goals from Mwape Musonda and Thabo Matlaba. Lidoda Duvha should have played Bidvest Wits away on February 6, but the game was called off due to inclement weather.

Pirates claimed a fifth successive league win when they defeated Chippa United 2-1 away from home on February 1, with Frank Mhango scoring a brace of goals. The Buccaneers have claimed 12 points from 10 away matches in the 2019/20 campaign.

In head-to-head stats, Leopards and Pirates have met in 21 league matches since 2001/02. The Buccaneers have claimed 17 wins compared to just one for Lidoda Duvha, while three games have been drawn. The Limpopo side has recorded one win, one draw and eight defeats in their 10 home matches in the rivalry.

When the teams met earlier this season, at Orlando Stadium in December 2019, Pirates claimed a 3-1 home win thanks to goals from Innocent Maela and Frank Mhango (two). The Buccaneers have racked up seven straight league wins over Lidoda Duvha. 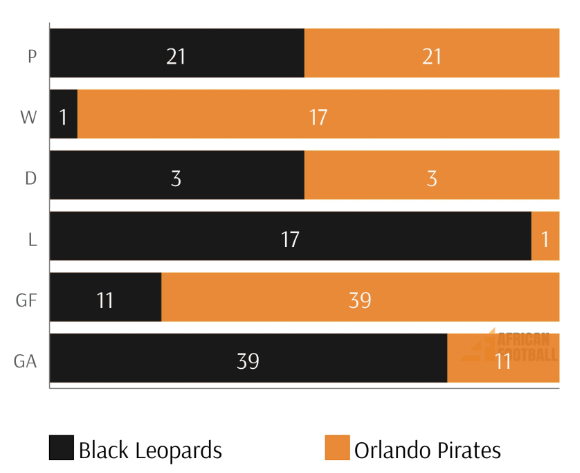