Chippa United will look to end their lean run in the Absa Premiership when they host AmaZulu at Nelson Mandela Bay Stadium on Saturday 29 February 2020, kick-off at 18h00.

Chippa have gone five league matches without a win after they were beaten 3-0 at Mamelodi Sundowns on February 15. The Chilli Boys have claimed 12 points from 11 home matches thus far in the 2019/20 Absa Premiership campaign.

AmaZulu suffered a 12th defeat of the season (and a fourth from their last five league matches) when they were beaten 2-1 at home by Golden Arrows in the Durban Derby on February 15. Usuthu have claimed just nine points from 11 away matches in this term’s PSL fixtures.

In head-to-head stats, AmaZulu and Chippa have met in nine league matches since 2012/13. The Chilli Boys have claimed six wins compared to one for Usuthu, while two games have been drawn. The Eastern Cape side has recorded one win, two draws and one defeat from their four home matches in the rivalry.

When the teams met earlier this season, at Princess Magogo Stadium in November 2019, Chippa claimed a 2-0 away win thanks to a brace of goals from William Twala. The Chilli Boys boast a 100 percent record away to AmaZulu. 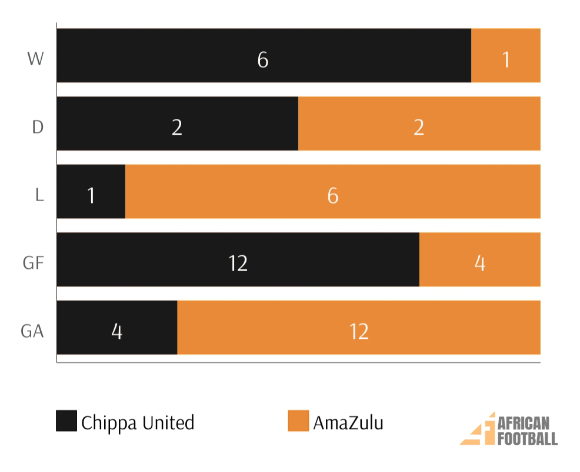