Thabo Qalinge of Supersport United during the Absa Premiership 2019/20 match between Supersport United and Mamelodi Sundowns at the Lucas Moripe Stadium, Atteridgeville on the 19 January 2020 ©Muzi Ntombela/BackpagePix

SuperSport United will be looking to avoid a hat-trick of Absa Premiership defeats when they host Bidvest Wits at Mbombela Stadium on Saturday 29 February 2020, kick-off at 20h15.

SuperSport suffered a second successive league loss (and a third from their last four matches) when they went down 1-0 away to Stellenbosch on February 14. Matsatsantsa have claimed 20 points from 11 home matches in this season’s run of PSL fixtures.

Wits have won just one of their last four league matches and their last outing ended in a 2-2 draw at home to Highlands Park on February 19, with goals from Haashim Domingo and Thulani Hlatshwayo. The Clever Boys have claimed an impressive 20 points from nine away matches in 2019/20.

In head-to-head stats, SuperSport and Wits have met in 55 league matches since 1990. Both the Clever Boys and Matsatsantsa have claimed 18 wins, while 19 games have been drawn. The Tshwane team has a record of nine wins, nine draws and nine defeats from 27 home matches in the rivalry. 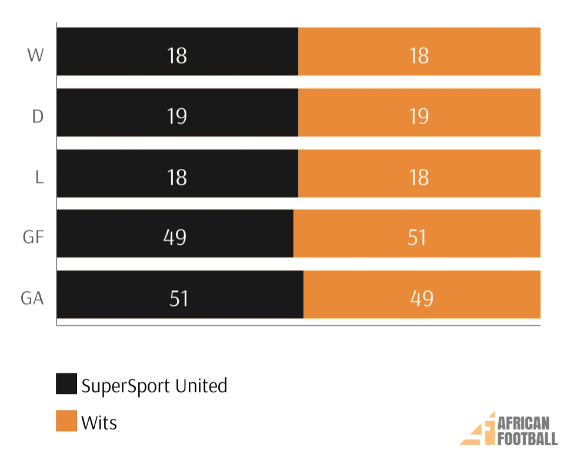 When the teams met earlier this season, at Bidvest Stadium in November 2019, SuperSport claimed a 1-0 away win thanks to a late strike from midfielder Sipho Mbule. The last six league meetings of the teams have produced just one home victory.