Polokwane City and Black Leopards will meet for a crunch Limpopo derby in the Absa Premiership, set for the Old Peter Mokaba Stadium on Sunday 1 March 2020, kick-off at 15h30.

Polokwane broke a five-game winless streak in the league with a 3-2 home triumph over Cape Town City on February 16, courtesy of goals from Walter Musona, Eden Nene and Puleng Tlolane. Rise and Shine have claimed 13 points from 11 home matches in this term PSL fixtures.

Leopards come into the clash on the back of a 1-0 loss at home to Orlando Pirates in their last league outing – an 11th defeat of the campaign for the Thohoyandou club. Lidoda Duvha have also claimed just five points from nine away matches in the 2019/20 campaign.

In head-to-head stats, Polokwane and Leopards have met in three previous matches. Rise and Shine have claimed two wins compared to one for Lidoda Duvha, while zero games have been drawn. Polokwane’s only previous home matches in the rivalry brought a 3-1 win in the 2018/19 season. 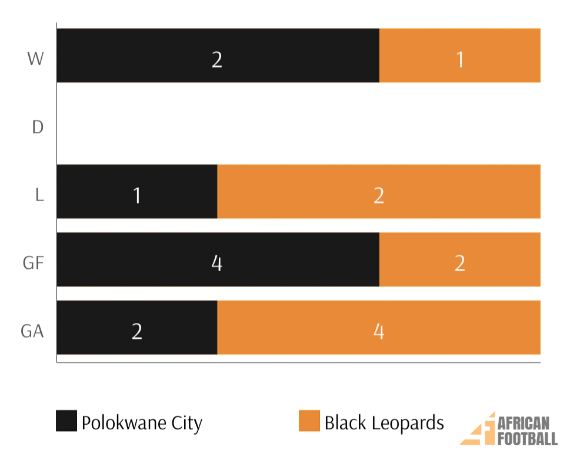 League record since since 2018/19. Credit: Africanfootball.com

When the teams met earlier in this league campaign, at Thohoyandou Stadium in August 2019, Rise and Shine claimed a 1-0 away win thanks to a goal from Sibusiso Mbonani.