Maritzburg United will look to continue their red-hot form in the Absa Premiership when they host Polokwane City at Harry Gwala Stadium on Friday 6 March 2020, kick-off at 20h00.

Maritzburg racked up a third straight league when they thrashed Stellenbosch 3-0 at home on February 28 in a PSL fixture, with goals from Bongokuhle Hlongwane (two) and Tebogo Tlolane. The Team of Choice has claimed 19 points from 11 home matches this season.

Polokwane claimed a second successive league win when they defeated Black Leopards 2-1 at home on March 1, courtesy of goals from Charlton Mashumba and Sibusiso Hlubi. Rise and Shine, however, have taken just seven points from 11 away matches this season.

In head-to-head stats, Polokwane and Maritzburg have met in 13 league matches since 2013/14. The teams have a dead-even record, with five wins apiece, three draws and 15 goals both scored and conceded. The KwaZulu-Natal club has recorded four wins and two defeats in their six home matches in the rivalry.

When the teams met earlier this season, at the Old Peter Mokaba Stadium in December 2019, Maritzburg claimed a 1-0 win thanks to a goal from Yusuf Jappie. It was a first away victory in the rivalry since 2016. 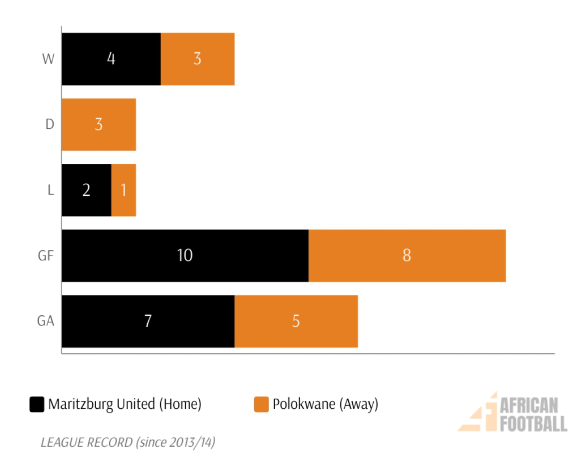 Highlands fight back to hold Arrows