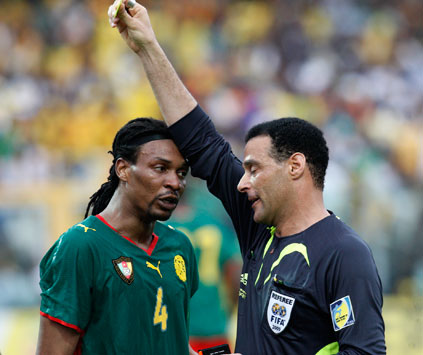 On the day of his 44th birthday, we look back at the moment African football legend Rigobert Song made FIFA World Cup history (for all the wrong reasons).

Song enjoyed a very successful international career, playing at a record eight Africa Cup of Nations tournaments, while he was part of the successful 2000 and 2002 Indomitable Lions teams.

Unfortunately for the former Cameroon defender, his World Cup appearances were less memorable and while he played at an impressive four tournaments he holds the record for the youngest player ever to be sent off at the global showpiece, aged 17.

He is also one of only two players (the other being Zinedine Zidane) to have been sent off in two different World Cups. Once against Brazil in 1994 and also against Chile at the 1998 tournament, which you can relive below: